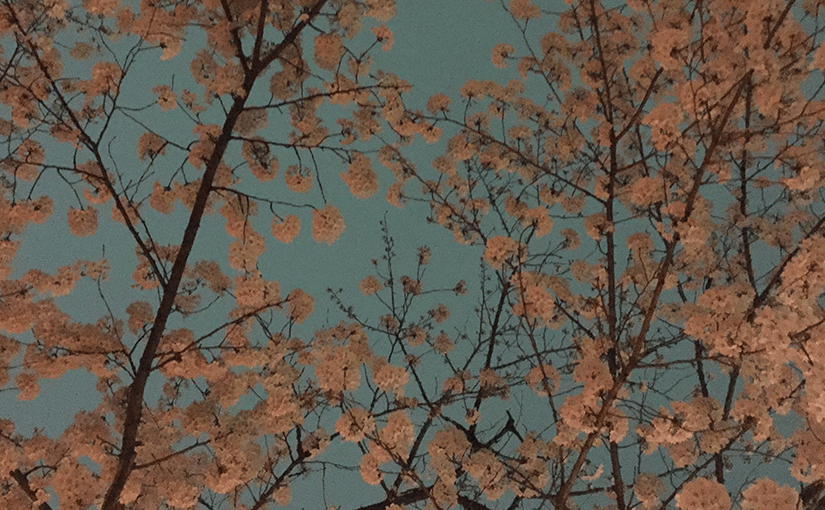 We’re back in Tokyo!

Our hotel here, The Hotel Excellent Ebisu (such a silly name) is a two minute walk from the Ebisu subway station. After checking into our room (which is just large enough to fit a double bed and a desk plus a small bathroom), and unpacking—aka rearranging the room completely so we could sort of fit our stuff—we decided to have some whisky.

Around 9:30 PM we left to find a vegetarian ramen restaurant which, after roaming the streets and consulting multiple people, we found out no longer exists. However, in the process of trying to find this place we made three new Japanese friends who spoke very (and I mean very) limited English—they also filmed our entire twenty-minute interaction. After some communication with Google Translate, they ended up walking us down the street to a place called Afuri Ramen, which turned out to be one of the best ramen restaurants in the area. We ordered our vegetarian ramen via vending machine (with the help of one of the waitresses because we are useless without English)—so cool. Within five minutes of sitting down we were eating delicious ramen (I’d say “slurping delicious ramen” because that’s actually how you’re supposed to enjoy ramen here—slurping, making noise, and not chewing— but I detest slurping and noisy eaters with all of my being so I won’t say that)—great way to start the night.

Completely full we left dinner and went to meet up with Brandon and Patty at Shamrock by Abbot’s Choice bar in Roppongi. We had a few drinks together before going our separate ways. Daniel and I caught a second wind and decided we’d explore Golden Gai—wall-to-wall izakaya (bars) in Shinjuku. The area of Golden Gai is smaller than an average city block with about six tiny streets populated by various closet-sized bars (each bar fits about five to eight people including the bartender). We found one bar where, according to the bartender, the theme was “nostalgic Japanese toys and candy.” We stayed for a few drinks until we decided to call it a night. We only realized how late we’d managed to stay out when we tried to take the subway back to our hotel and learned it was closed because it was 4:30 AM.

Sunday was the first morning we woke up on our own (without an alarm clock since Thailand). We grabbed croissants at the café next door and chose to spend our first morning in Tokyo at a laundry matt doing some domestic chores. While we were waiting for our laundry to cycle we walked to Shibuya and watched hundreds of people crisscrossing the streets at Shibuya Crossing or “scramble crossing”—it was pretty cool. Starving, we headed to L’OCCITANE Café (who knew they sold things other than body products) for lunch and ended up with a window spot on the third floor overlooking the cross walk. Then we went back to the laundry matt to dry our clothes just as it started to rain outside (not so fun). On our freezing-cold walk back to Hotel Excellent we popped into a place called Liquidroom, which is a live venue for punk music—we had no idea what was going on inside as no one spoke English and most people were dressed up in bizarre costumes with masks and weird fake fur accessories.

Back at the hotel we changed into warmer clothes and took the JR for thirty minutes to Ueno Park to check out the Cherry Blossom “Sakura” festival at night. I have never seen trees so magnificent before. The trunks are a beautiful whitish grey color and the marshmellowy powder pink and white petals are stunning beyond description. It was an awesome experience to be able to walk through a lantern-lit park with a pink floral ceiling. At the end of the trees is a staircase that leads down to a night market selling every type of (non-vegetarian) food you could imagine. It looked delicious, but considering we couldn’t eat anything we walked for twenty minutes towards Akihabara to an Pakistani-Indian restaurant called DELHI, which Daniel really enjoyed and I’d rather not spend another minute writing about.

After dinner we walked into the heart of Akihabara aka electronic town, which is also known as geek universe as it’s a hub for anime fans and cosplayers. Using Crissy’s map we wandered around the area. We went to Yodobashi, the largest of the many massive electronics mea-malls in the area (Daniel was super happy to shop around here), to Gundam Café, an anime themed café which wasn’t for us, to Anime Plaza (exactly what it sounds like), and to Super Potato Retro-kan a 5-floor vintage arcade shop. It was a totally mind-blowing experience to walk into a neighborhood where people dress up like cartoon/anime characters and take it really seriously.

Monday morning we woke up and went to Bagel Bagel for breakfast, before walking from Ebisu to Shibuya (to see Hachiko, the dog statue) and up to Cat Street. On Cat Street we walked in and out of a bunch of the shops until Daniel used Bean Hunter to find the most amazing coffee shop–The Roastery by Nozy Coffee, which reminded us of Four Barrel in San Francisco. We became friendly with one of the baristas named Riku, who took good care of us and helped us order. Then we continued on our walking tour and went to the Oriental Bazaar (a shop filled with Japanese China and Kimonos), to Kiddy Land (a 5 story mall filled with everything that’s every been considered cute/a product of San Rio Hello Kitty), to La Foret Mall (Harajuku fashion mall), and to KINJI (a vintage store). We stumbled into Tokyo Women’s Plaza, a mall with a brand new restaurant called Hands Café, and decided to sit down for lunch, which was delicious.

After lunch we walked to Harajuku (my favorite area) and took a walk down the very crowded and narrow Takeshita Street, where I felt like a salmon swimming upstream amid a crowd of giddy, sparkly girls and boys dressed like an all blond version of One Direction. Walking down this street only confirmed to me that there is one speed in Japan—Geisha-speed aka NO ONE walks quickly, briskly, or swiftly—at times walking through crowds here can feel frustrating as you know you aren’t getting anywhere anytime soon. Halfway down Takeshita Street we stopped at Marion Crepes (which we were told is a must do activity when in Harajuku) for crepes—they were pretty good but not better than milk tea.

At the end of this long street (and with all that remained of Daniel’s patience for being in this area) we stumbled on Pikura, a very popular photo-booth area where teenagers come to take photos with their friends. Unlike any photo booth I’ve been to before, these booths enlarge your eyes to make them look like those of an anime character and then let you decorate your photos with stamps and weird expressions before you print them. Obviously I had way to much fun here!

With our feet ready to fall off, we decided to take the JR back to Ebisu station to go to our hotel, before going to SpaJiro a Japanese pasta restaurant, for dinner (which was surprisingly delicious).