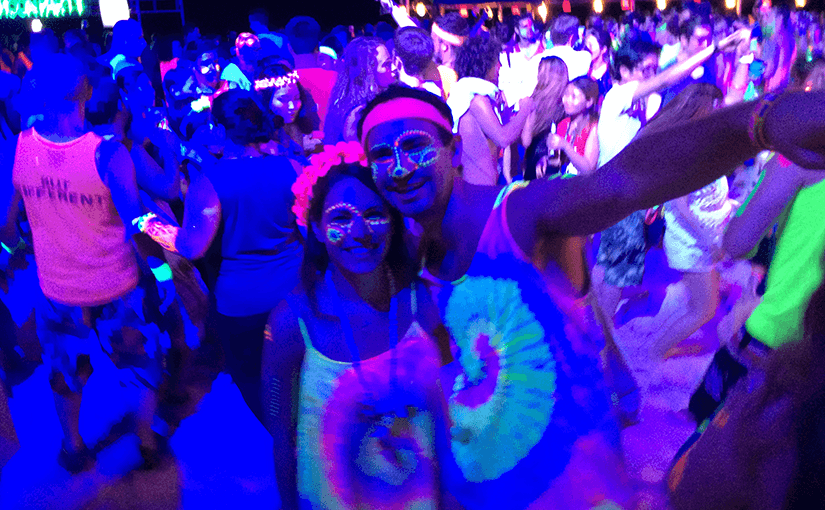 After our festive dinner at Little Israel, we headed over to HaBait to check out the Purim party, however, since we only got there at 11 PM, most people had already left for Haad Rin beach. So Daniel and I said goodbye to the people who ran the place, bought a bucket, and headed for the Full Moon party.—I know we keep saying it gets more packed everyday, but last night was beyond words, they said there were between ten and twenty thousand people on the beach…total insanity.

Full Moon party is basically a massive children’s birthday party (with a few adult modifications). All over the beach you can buy beach buckets (filled with alcohol), you can jump rope (rope dipped in kerosine ablaze with fire), you can play games (these also involve fire), you can get someone to paint your face and body (this gets quite raunchy), you can pee in the ocean (most people are too drunk to go to a bathroom), you can strip completely and roll in the shallow waves (doesn’t have the same cute connotation as when you’re a kid). The whole experience is definitely a trip, it’s kind of like a massive spring break on steroids. Every bar at the beach blasts their own music and has their own vibe, and everywhere you look you see neon. From the moment we got to the beach there were already people falling over themselves because they were too drunk. We found one guy that Daniel had some serious fun following with the GoPro—he was a mess.

Later on, we started to hear rumblings of people getting pick pocketed and decided to snap a few more photos before taking all of our possessions back to the hotel for safe keeping. Once we deposited our stuff, we headed back to the beach to party. Throughout the night we met a string of characters, too many to describe in detail, but it was throughly entertaining. Around 3 AM we walked to one side of the beach to sit down. After sitting for a while I turned to my right and realized I was sitting directly next to Graham (a friend I worked at Airbnb with for two years)… I mean of all ten/twenty thousand people on that beach what are the odds?—well actually Daniel worked this out last night. (Backstory: the night before, Graham had messaged me, but we realized it would probably be impossible to meet up at Full Moon and never really entertained the thought any further). Such a small world.

For the remainder of the night, we danced, walked, drank, people watched, and waited for the sun to rise (which it eventually did at 6:20 AM). After that we headed back to or hotel, put in earplugs (because the hotel’s next door neighbors host the monthly Full Moon after party which starts at 7 AM), and passed out until 11:30 AM. I hate to say it but I think we’re past or prime with regards to pulling all nighters.

We took a open taxi-truck to the Haad Rin pier and boarded the high-speed Lomprayah ferry to Ko Tao. On the ferry we listened to Serial (podcast) to keep ourselves awake. We arrived in Ko Tao around 2:30 and were picked up by our hotel and driven to the Amanjirah Resort. The place is beautiful with an infinity pool that looks right over the ocean! When we booked the room a few weeks back, we selected “The Mystery” option on their website, which means you basically roll the dice and take your chance at ending up in any room from a private pool villa to a budget room for a fixed price. Tonight we are staying in a nice room, but the next three nights it looks like we hit the jackpot with a really nice sea view room.

This afternoon we ate a late lunch (our first real meal in a while), and went for a dip in the pool—beyond refreshing; it’s humid as can be here. Daniel took a nap while I did some writing. Then we came to the pool to watch the sunset—it was spectacular, obviously. We’ve seen two consecutive sunsets and a sunrise now—we definitely won’t make it for tomorrow sunrise.

Sorry for the lack of excitement in today’s post, the lack of sleep is finally wearing on me.