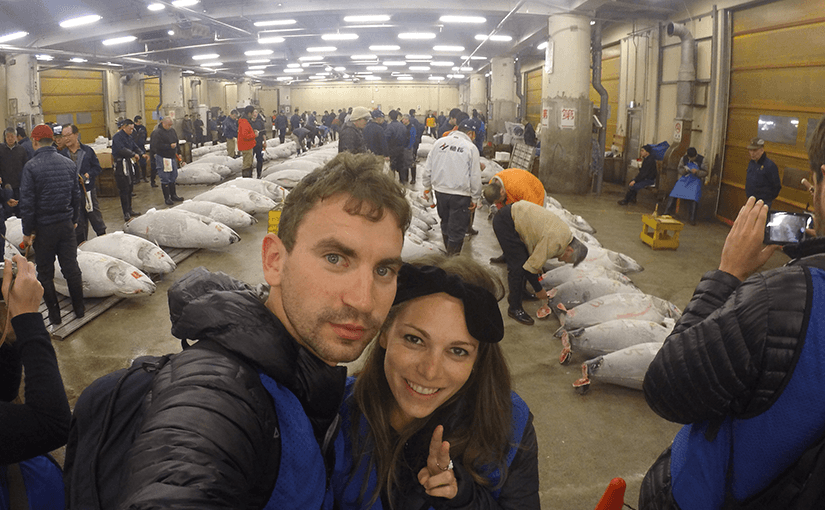 We’ve been moving non-stop since we’ve been here.

Tuesday morning we slept in and decided to have a more relaxing day, but in the same areas as the day before). We started off the day going back to Bagel Bagel for breakfast, and to The Roastery for coffee. Then we wandered into a few of Tokyo’s many sock shops (these shops, dedicated to the sale of socks and socks only, exist on every corner in this city—who knew how popular socks were here?). When we were near Harajuku we went to a store called 6% Doki Doki and I bought a cartoon tooth ring (so appropriate for my family). Such a cool store!

For lunch we went to Bill’s Omotesando a new restaurant by Bill Granger (Anthony Bourdain’s friend). The food was ridiculously good! I think I had one of the most delicious salads of my life with grilled halloumi cheese and vegetables. Daniel got an amazing sandwich with sage and mozzarella cheese as well as ricotta filled pancakes with banana. We would both highly recommend this restaurant to anyone visiting Tokyo so long as you’re up for an hour wait—but we promise the food is really that good!

In the afternoon Daniel and I split up, he wanted to do some work and I wanted to explore more of Shibuya. So I had a good few hours of getting lost in the shopping streets and malls of the area (but was too overwhelmed to buy anything) before reconvening back in Ebisu. We had a few drinks in the room (beer and sake) and then returned to SpaJiro for dinner at 11:00 PM (we had to convince them to let us in as they said the had already closed the kitchen—but when we told them we had came back a second night in a row, they miraculously let us in). Once again the food was delicious!

From 12:00 PM to 3:00 PM we bar-hopped and walked the streets to keep ourselves awake as we decided to go to the Tsukiji Fish Market with hopes of making it to the famous tuna auction. We took a cab at 3:15 in the morning and were the 64th and 65th people (we made the second group) to arrive out of a maximum of 120 people. We were given blue jerseys to put on over our clothes to identify us and sat in a “waiting room” until 5:50 AM when we were finally called into the auction.—If you want to see the Tsukiji tuna auction, here’s how it works. When you arrive at the fish market you must “apply” at the Osakana Fukyu Center (Fish Information Center) at the Kachidoki Gate, starting from 3:00AM on a first-come, first-serve basis. A first group of 60 visitors will be admitted to the auction between 5:25 and 5:50, while a second group of 60 visitors will be admitted between 5:50 and 6:15. If you don’t make it early enough, they will turn you away.

When we walked into the auction room we a bunch of sushi chefs standing over a couple hundred massive flash frozen tunas rubbing, poking and prodding them with some type of a hook on a stick . Moments later a man jumped on a box crate and started the auction; he was shouting so passionately he was basically singing. The auction was super quick and within a matter of minutes some of these men had spent the equivalent of a couple thousand dollars up to ten thousand dollars per tuna. Crazy!

At 6:30 AM we walked out of the tuna auction and into the outdoor fish market where we immediately got into another line to wait for fresh sushi for breakfast. After an hour and a half later we finally made it to the front of the line for Daiwa Sushi, Tsukiji’s most famous sushi bar, after which you’ll be expected to eat and run,   restaurant with 11 seats at the bar. The chef made us the most delicious sushi of all time (I know I’ve said that before, but this was really the winning meal of the trip) and when we left we were absolutely exhausted. We somehow managed to make it back to our hotel without falling asleep on public transit and spent the most of the day sleeping.

We woke up at 4:00 PM Wednesday afternoon and went straight to Shinjuku to check in for the Robot Restaurant. For a show that’s all about modernity, their check in process is extremely antiquated. They don’t let you do much online ahead of time and when you walk in the door they make you stand in random lines for no reason—but this is beside the point. At 5:30 PM we walked down the most amazing staircase (I can’t even describe it so just look at the photos) and walked into what felt like a game show. We sat down in our pre-assigned seats and soon watched the most incredible hour and a half of entertainment. Part girly show and part hilarity there isn’t anything, anywhere more amazing than the robot show. Featuring incredible and ridiculous lifelike giant robots manned by sequined and sparkly bikini-clad women with rainbow wigs, there’s enough neon and lights in the small space to light all of Shinjuku and then some…

Post show we walked to dinner at an Italian restaurant (it was the only restaurant without a line in the area) called Italian Market, but really should have been called, “We’re Learning to Make What We Think is Italian Food”. Needless to say, the food was nothing special. After dinner we walked to Don Quijote—a random four-story souvenir shop, and left almost immediately after to go back and pack.

Today was the last day of our trip. We woke up early to go back to Ueno Park to check out the cherry blossom trees during the day, which was more magnificent than the other night. It was crazy to see how many people were out so early at the park considering how dead the city feels at this time of day. After a bunch of photos we left and took the train to Harajuku station. We walked to The Roastry by Nozy Coffee for one last session with Riku (he’s the greatest) and went back to the hotel to get our bags. We took a 30-minute JR train to Noppori Station and another 30-minute Skytrain to Narita International Airport.

At the airport we happened to bump into a friend I met abroad in Argentina named Ben. Ben joined Daniel and I for sushi at Gate 33 (recommended by Tessa) for our last meal at Narita Airport—sometimes the world feels so small. Now were sitting on the plane on the way back to Los Angeles.

I can’t believe it’s been two months since we left. It’s been a wonderful adventure filled with amazing experiences and memories that we won’t soon forget.

Stay tuned as we’ll continue to post some other amazing things about the trip that we didn’t have time to do on the go.

Thanks so much for following our journey—we hope you enjoyed it!