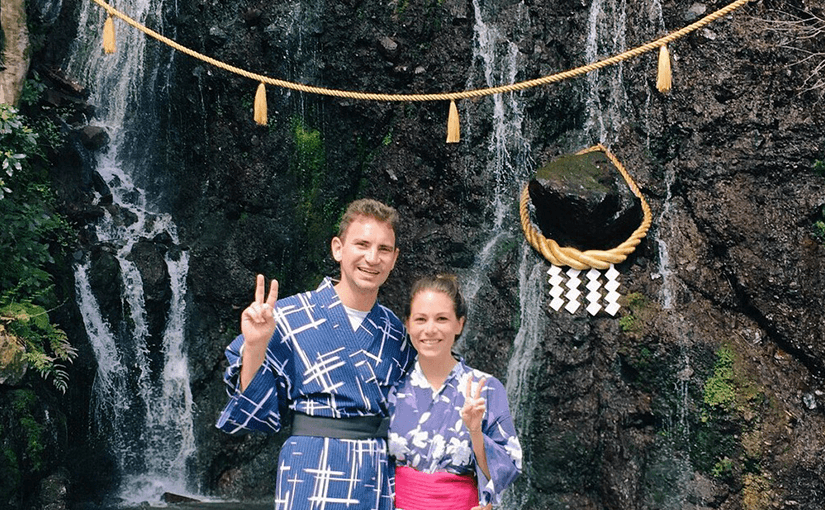 From Odawara Station, Daniel and I took the subway to the Hakone-Yumoto Station and walked about five minutes to another hole in the wall sushi-only restaurant for lunch. I’d love to tell you the name of it, but it was in Japanese and I can’t remember it. Anyway, the sushi may have been the best we’ve had! If you can find it, I suggest you go there.

We arrived at the beautiful Hakone Tensien Hotel, a traditional onsen ryokan in the afternoon. The moment we entered the hotel we were instructed to take our shoes off and put them in a “shoes box” as shoes are for the outside. We were then given a pair of Japanese socks that look like feet mittens or lobster claws (theres a place for your big toe and another place for your other four toes). After checking in we were handed traditional Japanese robes called yukata (the simple version of a kimono), put our bags in the room, and changed to go up to the gender-specific onsen (aka indoor spa). Thank goodness for the kindness of a Japanese teenager who saw me (probably looking as confused as I felt) when I walked into the changing room. She showed me what things to do (where to put my robe away, how to use the sitting shower, and to carry a small towel with me into every bath)—honestly I would have been completely lost without her. Daniel and I had different experiences, apparently he had to shave his beard off entirely before he could go into the baths (neither of us are sure if he actually had to do this or if there was a miscommunication somewhere) but we both thoroughly enjoyed it.

After the baths we explored the beautiful grounds of the hotel in traditional Japanese squishy sandals, surrounded by mountains, koi fish, ducks and waterfalls before heading back upstairs to work on the blog before dinner.

Dinner was the most incredible buffet of Japanese food and Western food (or some interpretation of it). Everyone in the ryokan wears their yukata robes to dinner along with their lobster socks—pretty amazing. Daniel and I tried anything that didn’t contain meat or shellfish, which included everything from nigiri, to french fries, to Japanese vegetables, to white chocolate fondue fountain. The sushi was fabulous and Daniel was loving the white chocolate fondue.

Saturday morning we woke up in a freezing cold room (because we’re idiots and we left the window open last night) which made it difficult to get out of bed. We put on our yukata robes and made it down to the breakfast buffet, which was good but nothing compared to dinner. The scrambled eggs, looked and tasted more like porridge (I decided these are not for me) so we ate toast and pancakes.

Even though we had a 10 AM checkout, we wanted to go back up to the onesen for one last spa hour, so we brought our bags down to the lobby (still dressed in our robes to check out). It turns out this is not standard practice at the hotel—they thought that we thought the robes were a gift and that we were trying to steal them. After some confusion we managed to clarify things and went up to the spa. It was awesome to be there just after cleaning hour ended because the whole onesen was relatively empty!

Daniel and I met in the lobby, went out to the garden and did a little photoshoot in our robes before handing them in. We walked to the Hakone-Yumoto Station and took the train to the Hakone Open Air Museum (recommended to us by Laurie and Washington). The museum was incredible—it had the most amazing sculpture garden ether of us have ever seen, amid the most gorgeous scenery and landscaping (plus the cherry blossom tress are blooming left and right). We spent a few hours walking around and right before we left I accidently stepped into a fountain and got one full soaking wet—so annoying. Then we took a VERY slow train ride back to Hakone station. We grabbed lunch at the same sushi place as the day before (we were the only ones inside) and headed back to hotel to get our bags.

We decided to splurge and take a five minute cab right back to the Hakone station and took a subway to Odawara station. Then we took the JR bullet train to Ebisu and finally ended up back in Tokyo! —transportation here is so much more efficient than in Thailand.

Another interesting thing to note—all female bathroom signs here lead you to believe that as a woman, you only have one leg.