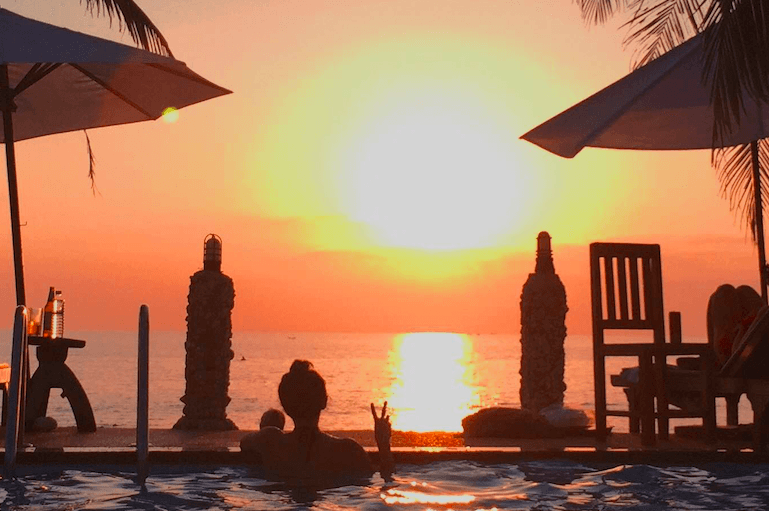 Hope everyone is enjoying their weekend! Here’s more reading material for when you’re bored or in need of something to read.

Friday afternoon we arrived in Ko Lanta. The moment we stepped off the ferry we were swarmed by 40-50 men all hawking their taxi and tuk tuk services. It was completely ridiculous. Eventually we decided to entertain one guy standing next to us rather than on top of us (but I think we really chose him because he was wearing the brightest and most colorful pants). He told us it would cost 400 Baht ($12) to get to our “hotel,” Daniel told him 250 Baht ($7) and he quickly agreed to the price (which makes me think we still overpaid), before trying to work us up to 300 Baht ($9) on the way to the car. Kind of comical actually, as he was trying to raise our ride price while other drivers standing in the “parking lot” were trying to poach us to ride with them (so popular). Tourism is definitely the money maker for this island.

We climbed into his truck bed (2 bench rows facing each other under a little canopy) and then he disappeared back into the massive crowd near the ferry. His wife came and sat guard on the end of the truck. Five minutes later the man returned with two tatted up Finish women (one with a tooth piercing—I’m not making this up, she had a little hole punched out of one of her front tooth with a purple crystal embedded for reasons I’ll never understand). The two women climbed in the truck, the wife came to sit guard and the man disappeared again. Daniel realized we could be waiting until the truck was full and tried to get off to find a tuk tuk that would drive us on our schedule. He was quickly intercepted by the wife on the back of the truck, who all of a sudden turned into a professional goalie because she refused to let Daniel get off. She started calling for her husband who came running over. Daniel told him (in his best Thai accent—which has been totally necessary every time he’s used it) that we didn’t want to wait longer and we could get another ride. The man jumped into the truck and drove us to our hotel. When we got out he and his wife unsuccessfully tried one more time to negotiate for 300 Baht.

We walked into the Pada (Pardon A Decrepit Accommodation) Hotel, which we had booked online the night before, and found two very mangy looking Shih Tzus in dresses lying on the floor. We approached the front counter and were greeted with papaya juice (not that they knew, but they were already off to a bad start cause neither Daniel nor I like papaya). The man behind the counter explained that we had only reserved a place, but still had to pay. We tried to look for another accommodation but he said they would charge us a no-show fee if we left. So we paid too much (by Thai standard) and were shown to a lime green bungalow—not so bad we thought until we walked in (which took a few minutes because “the key has to be almost fully in the door, but not too far in, and pressure has to be slightly applied to the left and then forcefully applied to the right or it don’t work”).

The room looked fine, but the bed must be a box spring (no mattress) with years of loose change floating around inside of it, covered in a thin sheet the texture of tissue paper. The bathroom is a pink tiled palace with a lovely combination toilet/shower (a concept I wasn’t privy to previously). Charming. Also, I forgot to mention that they require you to rent a beach towel every day. You are not allowed to reuse the one you had from the day before, and if you take your shower towel they will charge you the beach towel fee. We learned that this is the only hotel on our side of the island that requires this.

We flung our stuff down, changed into bathing suits, went to the shared pool next door and ate lunch. Not a bad way to start the afternoon! The views out over the water are stunning beyond belief. In the distance you can see these amazing islands/rock formations that distinguish this place from anywhere else I’ve ever been.

After a two and a half hour lunch (only because “service” here downright shouldn’t be called service—the people run away as fast as they can, even when you’re trying to order…?) we walked down on the beach to check it out. Eventually I heard someone screaming my name on one of the wooden massage decks at the top of the beach. I walked closer and realized it was Daniel and Laura (the people we met at the elephant park). They said they were able to spot me on the beach because I was taking a “Jumping Jaxy” photo (silly). Daniel and I walked over to say hi and they convinced us to get massages as well. We got an hour massage for $9 each while watching the sunset directly in front of us through strands of seashell wind chimes. It was in insane!!!

We walked back to Pardon A Decrepit Accommodation hotel and were told to climb through the bushes to get to our room, as there was a man standing in a human-sized hole in the middle of the wooden plank pathway. Ok.

For dinner we went back to the hotel next door (Lanta Palace Resort and Beach Club—where we had lunch) because the restaurant puts on a show every Friday night. Since we didn’t book we were looking for a place we could sit and found this awesome French couple—Julian and Margarit—who told us to join them. The show consisted of some dances that involved sarongs, pyramid structure, “poi” aka fire dancing, and Thai boys dressed up as middle eastern men (wearing the Groucho Marx glasses, except that the noses were cherry red) holding their beards and watching women dance and do some type of work—very “interesting”. Random note: Ko Lanta is a Muslim island, which is crazy as we’ve been told that 90% of Thailand is Buddhist. Anyway, Julian and Margarit were awesome. We had a lot of fun with them and closed down the restaurant/bar with them at one AM. When we got back to our grand palace we could hear the man still hammering away at replacing the walk way—a lovely way to fall to sleep. If anyone would like a soundtrack of the soothing sounds of Ko Lanta, please let me know and I’ll try to acquire a CD for you.

Saturday morning we ate breakfast, booked our ferry to Railay and went on a walk down the beach to explore. We found a fantastic spot outside of a bungalow restaurant on the beach and decided the only thing that would make the day even better would be to get rafts for the water. We walked to the nearest shop, picked up rafts, ran into two people from our cooking class in Chiang Mai, ran into a couple from the plane ride to Thailand (Thailand is starting to feel like a small village), and headed back to our spot on the beach. We stayed there the entire day, ordered food (we found some fun misspelled words on the menu) blew up the rafts (which took forever), went in the water, and read. Just before sunset we walked back to the hotel next door to our place and watched the sunset from inside the pool.

We met Daniel and Laura for dinner that night at the hotel restaurant next door (yes, we could have ventured elsewhere, but the food/ambiance was good and Daniel Seeff was obsessed with their green curry). Just after we ordered we saw Julian and Margarit and invited them to join us. Coincidently, both Daniel and Julian are doctors, so we heard a few good stories from them. After a delicious meal we called it a night.

We woke up this morning, ate breakfast, checked out, and went to the beach. Now we are in a truck on the way back to the ferry to go to Railay.