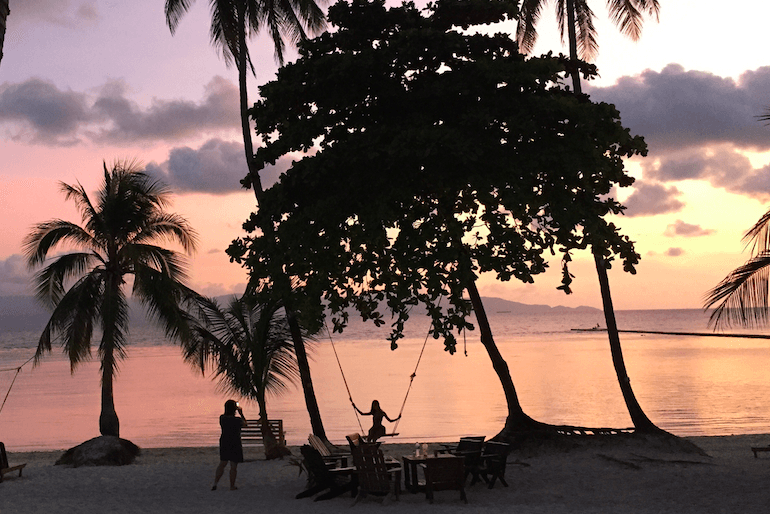 Happy Buddha Day! (I just learned about this holiday last night, which recognizes nine full months after Buddha reached Enlightenment, but to tourists it really just means a day where almost all places don’t sell alcohol).

Sunday was a day of planes, trains and automobiles (minus the planes and trains and add in a ferry and a high speed boat).  We got up early (at 7:45 am) and boarded a two and a half hour ferry to Krabi. From Krabi we took ten minute taxi van to a double decker bus. We took the double decker bus two and a half hours (driving under 30 mph the entire time) to Don Sak Pier, where we waited an hour because the high speed ferry was delayed—thank goodness for the Serial podcast. At 4:00 PM we boarded the two hour high speed ferry and headed for Ko Phanang. Mid way though the ride someone’s backpack (from the pile where they make you store your bags when you get on) flew off the boat and the crew just kind of shrugged—I can only imagine how frustrated the owner of that pack must have been when they arrived because there is definitely no such thing as luggage insurance on these boats. When we finally arrived on the island we took a twenty five minute taxi van and then a five minute truck ride to our hotel the Coco Hut. All I can say is I was definitely glad that this was where we landed after such a long schlep. The place is magnificent!

The hotel is run by an Israeli and is basically little Israel—you hear more Hebrew than any other language here (I keep waiting for Adam Sandler to make a surprise entrance as the Zohan). We checked in and were shown to our room, a fantastic modern bungalow with an insane view. The only catch is that a bungalow with a view requires climbing A LOT of stairs. As in, we feel like we are climbing the 306 steps up Wat Phra That Doi Suthep in Chiang Mai, so basically our bungalow is a temple that requires an act of great strength and meditation to get to.

Delighted with our accommodation we realized we were starving from not eating a real meal all day. We walked to the town and found a restaurant with Israeli food—quite a nice change from everyday Thai food.

I know that earlier I touched on the notion that I was not designed to carry a backpack, but I really wasn’t joking. I must have done something really bad because my lower back was in a bad way the whole day of travel. Sitting and lying down every which way I tried on all the busses, boats, and taxis was a struggle, so after dinner I decided a back massage was in order. For 300 Baht ($9) an older Thai woman named Gidt was able to change my life. I showed her where I was in pain and she proceeded to give me the works. It was definitely the most unconventional massage I’ve ever had but I’d do it again in a heartbeat. She performed moves* (that I’ve named myself) like Santa’s Sleigh, Flappy Bird, the Elephant Dancer, Snap Crackle Pop, and Surprise I’m Standing On Your Back like a true champion. I now know what a dog feels like when it’s getting trained. Gidt would tell me to do something. I would proceed to move myself into every imaginable position I thought she might want me to move into, only to be corrected again and again. I had her in tears laughing at me, but I don’t care because after that massage I felt like a new person. Later that night we walked the beach where the full moon party takes place and watched the poi shows. Then we went back to our hotel, ascended the steps to our personal temple and passed out.

Monday we woke up, ate an Israeli breakfast, and went down to the beach. We may as well be in Israel with all of the cucumbers, Israeli music, Hebrew and matkot down here. It’s amazing how much more Israeli than Thai this place feels (all the restaurants serve hummus, schnitzel, Israeli salad, in addition to Thai food—they definitely know their audience).

After a day of chilling at the hotel we went back into town and had dinner at the Israeli restaurant called Habayit HaYisraeli. Our Thai waiter asked us in Hebrew what we wanted to order—so funny. We had a lovely meal and then decided to lay in the hammocks in the restaurant and digest. At some point we met a guy from Brooklyn named Steve, who has been living here for two years running a company called Sababa Tours from inside of Habait HaYisraeli. Steve is kind of like the glue in this very transient island life atmosphere. He’s just constantly networking trying to connect people with each other to go to parties and such. He told us some cool places to go on the island and introduced us to Avivit (from Israel-obviously). We hung out with them for a bit and later ended up at Haad Rin beach again to watch the entertainment.

At the beach we ordered our first bucket since being here (gin and tonic, which were both pretty sure was gin and soda) and watched yet another poi show. Curious by lights we saw up on the side of the mountain surrounding the beach, we climbed up some serious stairs to get to a bar called Mellow Mountain. From up there we could see all of the activity going on down on the beach. Not a bad way to end the night.

Yesterday we slept in and went to breakfast at the last possible minute before they shut down. Then we wandered around town for a while and got lunch at the self-proclaimed Delight Restaurant.  We spent the majority of the day on the beach playing in the waves—it was the best!  At one point in the day I went to go to the bathroom and  happened to walk in on a local sitting on the throne, speedo around his ankles, smoking a cigarette with the door wide open—I was much more startled by the interaction that he seemed to be. After we saw each other he kind of half shut the door without so much as flinching. I couldn’t stop cracking up.

We came back to the Coco Hut (aka Little Israel) to watch the sunset and it was absolutely magnificent! Between the sky and the ocean, every beautiful color you could imagine was represented. After sunset, we went into the pool to cool off.  Everything was going swimmingly until we turned around to see two of the maintenance staff using a hairdryer to dry something in the pool filter. Oy. It really goes without saying (but I’ll say it for your sake), that our swim at the pool ended there.

Last night we went back to dinner at Habait HaYisraeli (same place as last night). After dinner we went to partake in usual beach night fun before calling it a night.  All in all, we are very happy to be here!

Now it’s Wednesday morning and we’re putting up this blog for you to enjoy before we switch rooms (long story).

Boker Tov from us and Laila Tov to most of you. Xx from Ko Phanang (the Israel of Thailand)

*I can later show these moves if anyone would like to see.