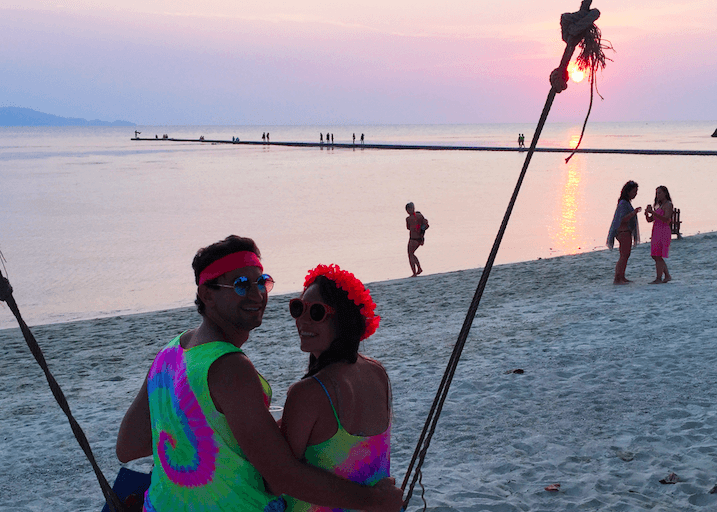 Wednesday, yesterday, we decided to take a little day trip to a place called Thongsala, per our friend Steve’s recommendation. We got into a taxi aka the back of a truck and drove, or rather gunned it, for 30 minutes up and down some serious hills to get there. In the back of the truck we met two guys from Germany who told us places to go in Ko Tao (our next island). When we arrived we decided to go for lunch at a place called “Clean Vegetarian Restaurant”. Now I’m not sure if the owners of the place thought that Clean Vegetarian Restaurant sounded like a cool name, but I can assure you this place was the opposite of vegetarian and definitely not clean. We opened a menu, the size of a children’s book (complete with lots of colorful pictures), to find pages and pages of pork dishes. We finally found a small section that said Vegetarianism and ordered from there. The food was good, but nothing special, especially since Daniel found two hairs in his (is hair vegetarian?).

After lunch we wandered around the streets for a bit, went to a shop Steve told us to go to run by an Indian man named Hit, and then went to haggle with some of the local vendors to buy Full Moon attire (neon clothing) for Purim and Full Moon party. After about two hours we decided to take another truck-taxi back to Haad Rin beach. The ride back reminded me of the way taxi drivers in Buenos Aires drive—fast, furious, and with no regard for other drivers or people on or near the road. We were thrilled when the ride was over.

We spent the majority of the day back at Haad Rin beach hanging out in the ocean—the water was much calmer than the day before, however the beach was twice as packed. It’s amazing how the number of people in Haad Rin has at least doubled everyday since we’ve been here because everyone is starting to come for the Full Moon party. When we left the beach I couldn’t help but notice a local vendor selling rad tie dye print clothing. Long story short we decided to be Hippies for Purim.

We came back to Little Israel, changed into our Purim costumes, applied some body paint and went down to the beach to watch the sunset and the Israelis. I don’t think I’ve mentioned his yet, but the Israeli girls here make my photo game look weak. These girls spend all day taking hundreds of modeling shots on the beach, regardless of the fact that their friends all take the exact same shots. It is quite possibly one of the most entertaining things to watch…ever. I’m pretty sure competitive posing and modeling will at some point be considered a national past time for Israel.

After sunset we walked over to Habait HaYisrael for a Megillah reading (it had nothing on you Peretz). Turns out Daniel and I were the only people there in costume (not that I mind as I love any opportunity to dress up). We later learned that even though the Megillah was read, the actual Purim party was moved to Thursday night (the same night as the Full Moon party) because of Buddha Day. As I mentioned before, no one is allowed to sell alcohol or throw parties on Buddha Day, and if they get caught doing so, they will receive a 22,000 Baht ($7,300) fine. So, we hung out at Habait for a few hours and had another amazing dinner. While eating we met a Swedish chick who lives in Israel named Naomi. She told us about the northern part of Ko Phangan, much more of a yogi/hippie vibe up there and about a yoga retreat she did in Ko Samui—sounds awesome. Then we chatted with Steve for a while about Full Moon party before leaving to go to Haad Rin beach.

The beach was fuller than any other night, but eerily quiet without any music playing. As we walked down the beach it was the first time we could really hear people talking—so many different accents here it’s crazy. Over the beach, we went back to our room to pass out.

This morning we woke up and went to breakfast. The breakfast bar was so much more full than it’d been every other day. Another observation I’ve made about the Israelis is that they eat bread at breakfast like it’s going out of style. In the middle of every table, whether there are two people or six people, is a plate of bread (about half a loaf, no exaggeration) stacked pretty high. Such an interesting thing. Go gluten.

We spent the afternoon working on Say it with a Sock and then went back to Habait for lunch. No new restaurants ever (I mean we found a place that serves delicious food with a great atmosphere and nice people, so why chance it with hairy food). After lunch we went to a very very full Haad Rin beach and got in the water on our floats. All of a sudden we started feeling stinging sensations everywhere, as did many of the people around us. We got out of the water, skin burning and turning red, from either jellyfish larval or sea lice (gross). As we sat back down on the beach, all the people surrounding us told us they left the water for the same reason. We decided to call it a day at the beach and head back to our pool.

We watched our last sunset in Ko Phangan and scouted for the future Miss Israel pageant—the jury is still out on the winner.

Tonight we had a Full Moon dinner at Little Israel, which entailed a decked out dinning area complete with a DJ booth made to look like a boat and a very earnest welcoming committee of staff ready to give out lei’s made of Styrofoam and purple flowers.

Now we’re headed back to HaBait for a Purim party, and then to Haad Rin beach for the Full Moon party.

We’ll give you all the details in the next post!