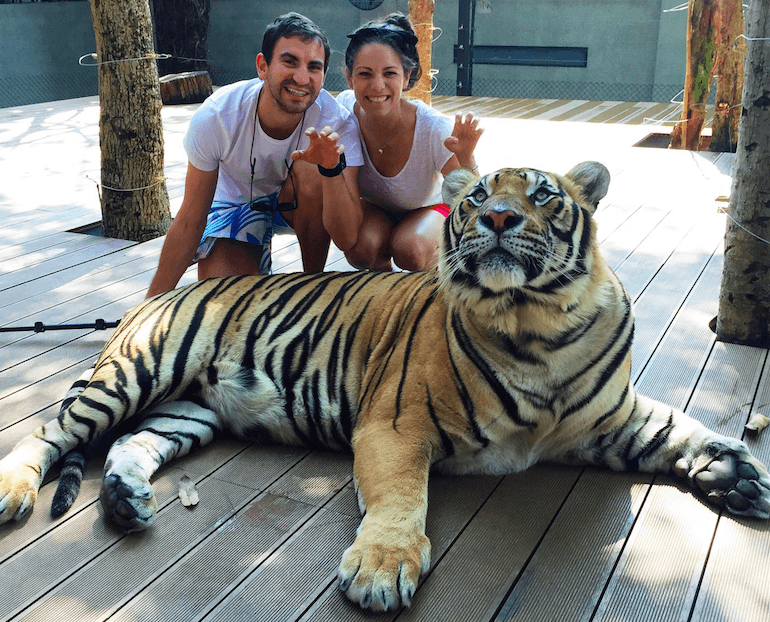 Aloha (as they say in Thailand)!

***Disclaimer: this is a short novel That we’ll be parceling out over several long posts Read when you’re bored.

Missing all of you and thought we’d give you all a little update since we’re not able to chat with all of you yet on What’s App.

We’re having an awesome trip. Spent 3 days in Bangkok (the city is basically organized chaos to sum it up). The first day we went on a river boat, did 2 out of the 3 major temples—Wat Phra Kaew (The Temple of the Emerald Buddha) and Wat Pho (the birthplace of the Thai massage and the home of Thailand’s largest reclining Buddha)—and went to a vegetarian Thai restaurant (Arawy Vegetarian Restaurant) where they spoke no English. We asked what everything was and they thought we ordered everything, so we ended up with a random smorgasbord of vegetarian food.

The second day we went to the Jim Thompson House (an ex-pat American who moved to Thailand and made crazy things happen in the silk industry)—a really cool experience. Then we walked the streets. Went to a local market and then to one of the massive shopping centers for a food court lunch. We went to a sushi restaurant for dinner and then to Khoasan Road (the most touristy, dregs-of-the-world/middle earth type of place) to see what we were missing out on—absolutely nothing was the answer.

The third day we woke up early and went to Chatuchuk Market—one of the largest weekend markets in the world, known for everything from amazing vintage wear, exotic animals, plastic fruits and foods (yes there is a whole section for this), food and much much more (27 full sections). I loved it! Then we went to another massive shopping mall for a food court lunch and air conditioning. We chilled at our hotel pool until we had to go to the airport that night. Daniel bought me a $1 fried rice at the airport for Valentines Day dinner (so romantic).

We got to Chiang Mai (up north) Wednesday night. This city is awesome.  We hired a driver named Mr M, who Rakow recommended to us when she was here.

Yesterday we met Mr M at our hotel The Royal Lanna (which Daniel as been calling the Royal Shithole) and went to The Tiger Kingdom —where we got to choose to go in the enclosure with “big, medium, small, or smallest” size tigers. Daniel and I went with the big ones and it was terrifying. It made the cheetah park in South Africa (where you either look at animals in a large enclosure or sit in a safari truck with a guide with a gun)!look perfectly safe. At this park it was us in a cage with 4 tigers, 4 boys with sticks and a few other idiots like us. It made for some awesome photos, though can’t say we would do it again. Best part is the animals were named Michael, Frankie, Nancy, and San Diego.

After the tiger park we went to Baan Tong Luang Village where 5 tribes live—most notably the Padong/Karen Long Neck tribe. All the tribes live in huts separated across the hillside and sell random goods according to their tribe’s style. We went straight to the Long Neck tribes and I feel very good saying that I supported all of them enough to send a child to school for a year. Just kidding, not that insane—but I played a very good tourist in true Jacks form.

Once we left the hillside we went to a traditional Thai restaurant and then to a small town’s local wat (Wat Pa Dara Phirom). It’s insane how much detail they put into these places, especially when there are so many of them around the city. After the local wat we went to northern Thailand’s most sacred temple at the top of a mountain Wat Phrathat Doi Suthep.  You have to climb 306 steps (not terrible, but we got our shvitz on) to get up there. Same thing there- lots of ornate paintings and enough Buddha statutes to populate a continent. We also found that lots of couples and families like to match identically (which I went insane about and chased them until I got them to let me take photos of them so Daniel could slyly get some good photos).

Around 5:00 pm Mr M dropped us off at the Sunday Walking Market—a massive street market that never ends (seriously we never found an end cause it just zigs and zags down each street).  We found an Italian restaurant (Girasole) outdoors that faced onto the market. Got a Thai pizza and wine and then went back to the Royal Shithole and went to bed.