Monday morning we watched the sun rise and drove for an hour to Herakilon Port to take a ferry to Thira Port in Santorini. We sat in nice seats at a table across from these fabulous people (below). Tip: Daniel read on a few travel sites to buy the top deck seats on the ferry for view purposes. I personally don’t think it made much of a difference, especially since we slept most of the time anyway. 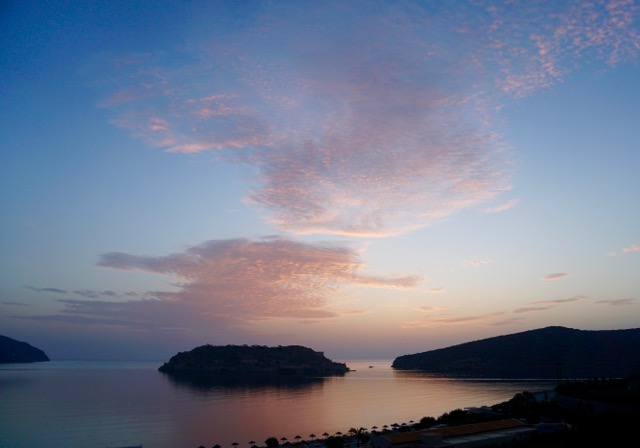 We arrived in Thira at eleven and sprinted to get one of the illusive taxis. However, wherever we sprinted had no taxis at all. Instead, we found mini busses—lots and lots of mini busses, which meant lots and lots of mini bus drivers (all of whom are looking to haggle you until you give in to riding in their vehicle). These guys told us it would take an hour for a taxi to arrive (which a blog we read confirmed).

So, Daniel negotiated with one man who wouldn’t leave us alone. The deal was we would go with him if he would leave the port immediately and not wait for any more passengers.  Shockingly, the deal was for real.  He drove us into the town of Fira (even though we were staying in Firostefani) and told us ‘this’ was where we were staying, pointing vaguely to the long area ahead. Daniel asked him to go to location our Airbnb host had given us and he told us we were there….obviously we were not there, we were about half a mile down a steep winding hill from “there”. Thus,  we pushed our suitcases up the street behind his mini bus, until we could no longer see it. What a delight!

At the top of the hill we were met by the man who ran the operations for our Airbnb. Thankfully, he was a doll and rolled our luggage down a narrow cobblestone path way until we reached a flat roof with a “VIP rope” —”private parking” he said. Next we descended the stairs to a private infinity pool flanked by two beach chairs on either side. Such stunning views!

The Airbnb unit we booked (he had another unit adjacent to ours that shared the pool) was still being cleaned. The man showed us both units, each with the Santorini white vibe, but one with a down stairs. We opted for the one we hadn’t booked as it had better views and it was already clean. Settling into our Airbnb, we unloaded our stuff and walked through Firostefani. It’s exactly what you would expect it to look like from all the postcards. We found the church that the Canadians we met at Glossites in Chania had told us to look for and went to the tiny blue and white restaurant Aktaion directly across for lunch. The food was delicious, especially the rolled eggplant. The owner Danny was fabulous. We ended up making dinner reservations there for Tuesday night also. 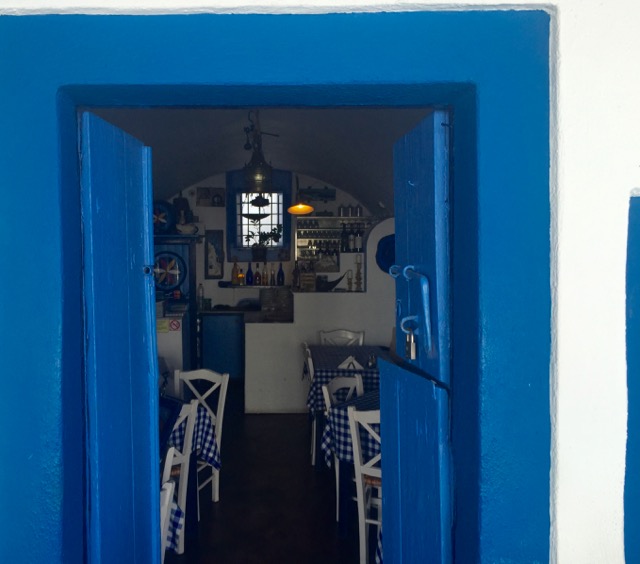 After lunch we swam and laid out. Daniel rented an ATV down the street (everyone on this island gets around on them or motorbikes) and around six we left to drive to Oia for the much anticipated  of Santorini sunsets. We rushed through the crowds hoping to find a solid spot to watch sun go down. At the top of a view point we climbed over a wall to sit on a roof and waited until the sun went down so we could take 900 photos. It was beautiful! After the sunset we walked through the crowded and very touristy streets until we got back to our ATV. We drove down to Fira proper to check out their touristy scene. If you haven’t gathered by now, Santorini is much more touristy than Crete. 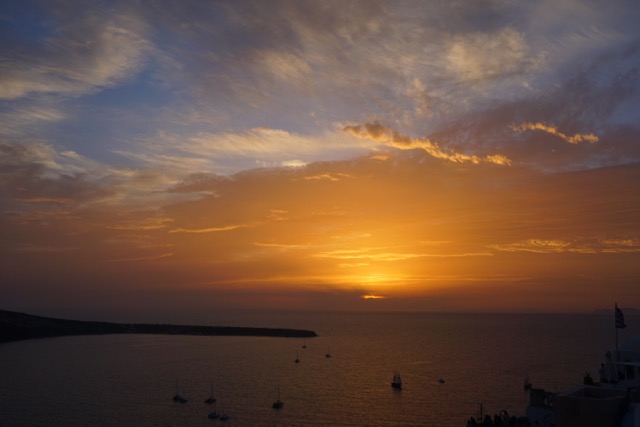 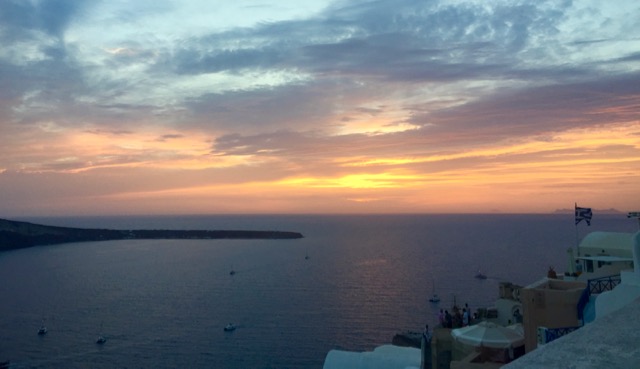 We were craving Italian for dinner so we went to a restaurant called Da Vinci. We had a Ukranian waiter, serving Italian food in Greece. Kinda funny. Food was delicious. Ordered a pizza and a pasta and then headed home to go to sleep.

Tuesday morning we woke up to howling wind. The sky was gray and damp and the island looked pretty abandoned. We drove the ATV to some area to get breakfast. Many of the places we wanted to go were closing up cause of the wind so we settled on a really average place. Afterwards we decided to go back to our Airbnb and read. The wind on this island doesn’t leave for too much to do, so we decided to make cocktails and enjoy our porch until the sun eventually came out.

Considering the wind, we decided to go somewhere closer than Oia for sunset so we drove to the same areas where we had breakfast. We saw a great bar at the top of the cliff called La Maltese and decided to go there for Aperol Spritzes and the sunset. The sunset was beautiful but the wind was ridiculous. Freezing cold we went back to our side of town to get warmer clothes before dinner.

We left for Aktaion for dinner, a five minute walk down the street. When we got there we were told our reservation was for 9 and not 9:30, honest mistake on our part. Danny told us it would be another 5-10 minutes so we walked around until they were ready for us. We eventually sat down and ordered, the food was ridiculous. We ordered a twist on tzaziki, the eggplant rolls, feta skewers, and a Greek pasta. When the pasta was being delivered, presumably by Danny’s father, he made some comment to us along the lines of , “Are you ready to realize/let us know that your reservation was at 9 and not 9:30—you’re lucky you still got a table”. I was shocked by his lack of hospitality!  Anyway, the food was great but we left right after to go home. No ouzo shots this night.

Wednesday was a perfectly clear and sunny day! We got on the ATV and rode to Oia for breakfast and to take some photos. We walked through the the narrow passages and down the winding stair cases that almost inevitably led to a roped off private area, until I was satisfied. Then we rode back to Firostefani and picked up lunch from a restaurant called Why Not? Souvlaki, to eat on our patio. 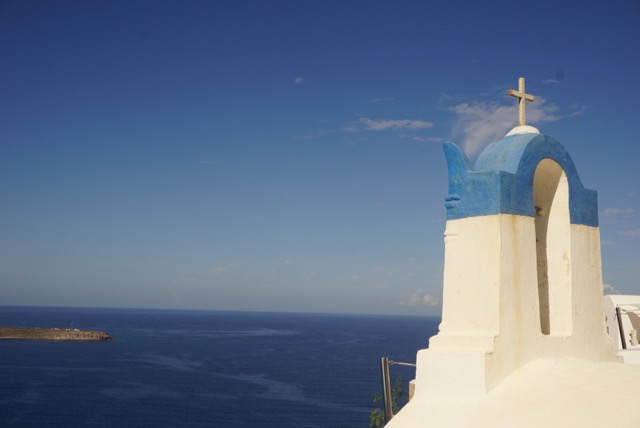 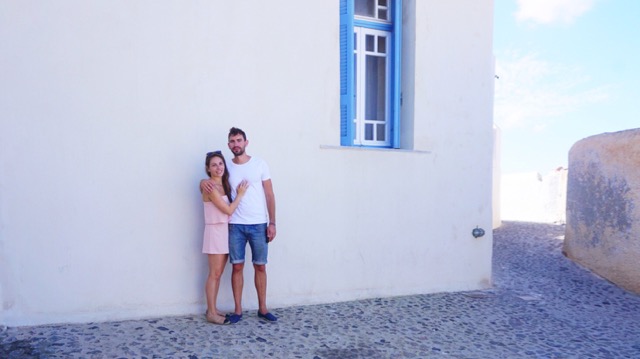 At 1:45 we went to meet the driver from Santorini Yachting Club who would take us to our afternoon/sunset boat cruise. We’d expected a mini bus, instead we were squeezed into a hatchback coup with Patricia and Kevin from the UK and drove for 45 minutes—so cute. She’s basically the Ramona Singer of wherever she’s from.

We arrived at a marina at the bottom of the island, and boarded a boat called the Lagoon 52. There were about 20 of us onboard and we cruised for 5 hours to the red beach, the white beach, and the black beach. The boat served drinks and dinner. We cruised all the way to Oia where we watched the sunset. It was magnificent! Then we got off and road a mini bus back to our Airbnb with Patricia, Kevin and everyone else on our boat. 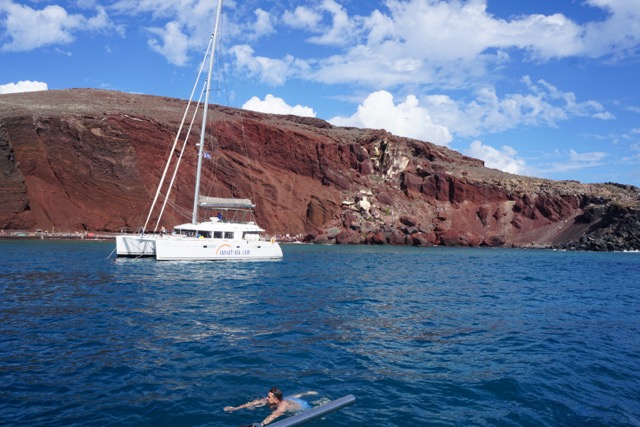 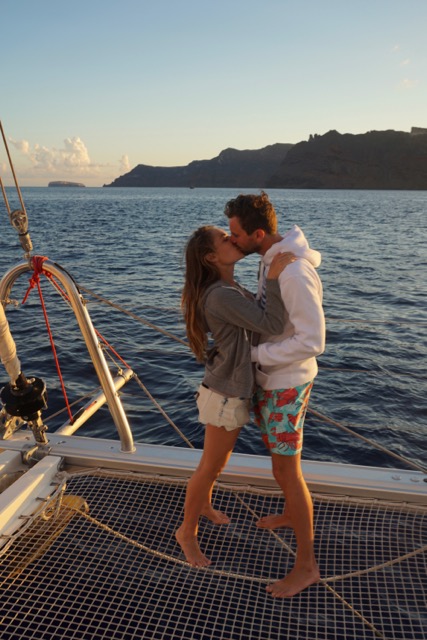 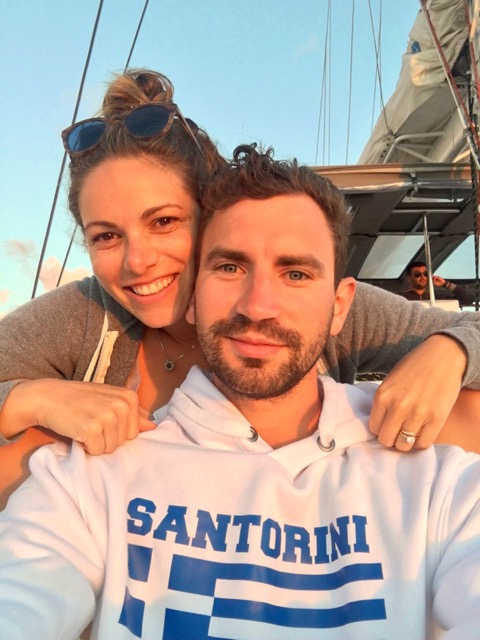 Tip: The black beach— it contains hot springs which were warm, but looked like a muddy river amid clear blue water. Because i’m a genius I packed only white bathing suits, but after going in the hot sulphur hot spring waters I now have a clay-brown bathing suit. Note to anyone planning to do this, bring a dark colored bathing suit!

Thursday morning, on our last day in Greece, we decided we’d get a little exercise after a week plus of competitive eating. Not knowing what we were getting ourselves into, we set out to climb up and down the stairs from Fira to the Old Market down by the ocean. Although we could smell donkey shit as we started our decent, we didn’t piece together the number of donkeys that would appear towards the middle of the top and the middle of the bottom of the stairs.

As we descended into the third bend of the stairs, I immediately regretted our decision to take this hike but followed Daniel anyway. When we reached the bottom we took a photo and climbed back up the stairs faster than we climbed down (for fear of having to spend any more time near rouge donkeys climbing the steps and tourists on donkeys asking us if we could take their photos at every curve). By the time we reached the top we were both beet red.

Profusely sweating, we rushed back to our Airbnb to jump in the pool, pack up, and shower before we had to check out. Thankfully, Daniel rented a car for 35 Euros for the rest of the day so that we had somewhere to store our bags (also it was 40 Euro taxi to the airport).

We took the car and drove out of Firostefani to a restaurant called Metaxi Mas (across the street from a random goat herder and behind a beautiful cathedral). The restaurant was so cute and served some of the best food we’ve had in Greece. We ordered a pomegranate salad (I’m still dreaming about this), a baked feta cheese in phyllo dough, sesame seeds and honey, as well as a a baked eggplant dish. I was so hungry I forgot to take photos of the food. Everything was UNBELIEVABLE—honestly one of my top 3 meals of the trip. 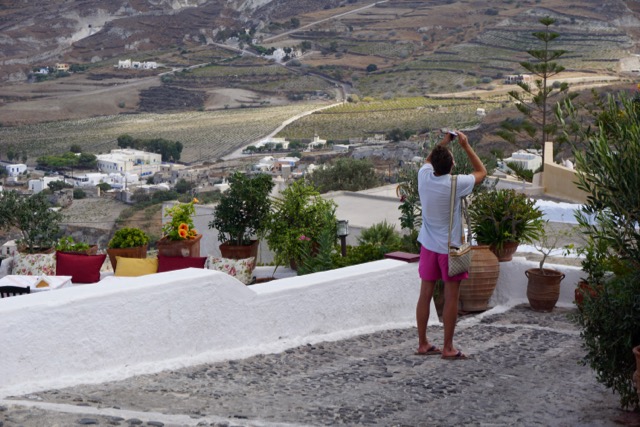 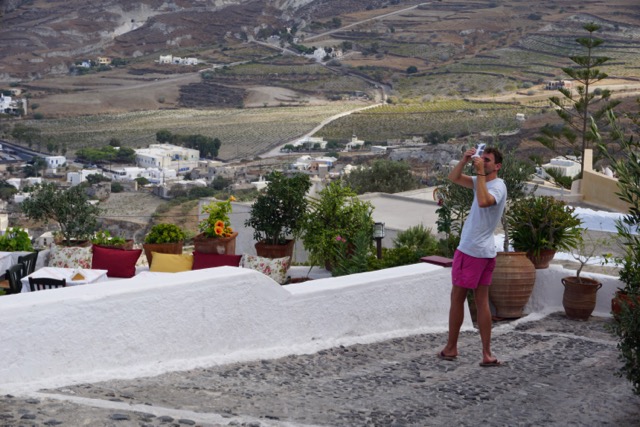 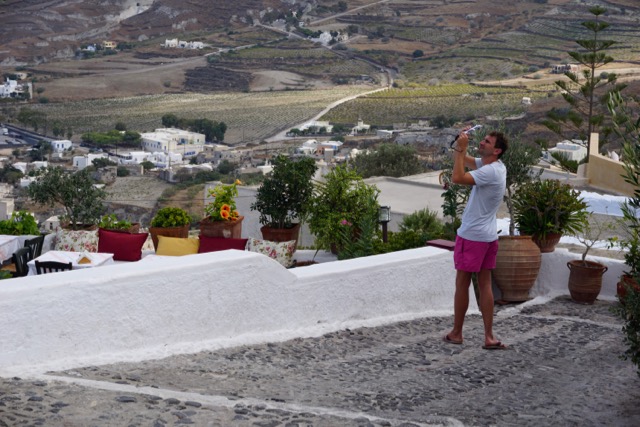 After lunch we got back into the car and drove down to a little beach town where we walked around until we decided to get beach chairs. We spent the try of the day on the beach and only got back in the car to drive up to some winery (with a ridiculous view) for the sunset. It was epic, even better than the one in Oia. 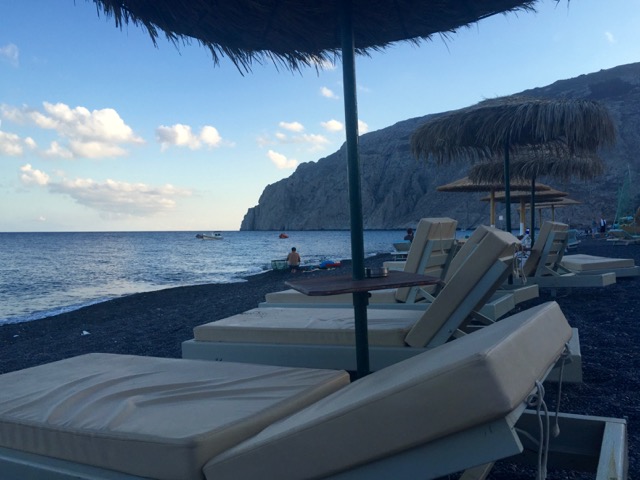 We had a 9:00 flight on Aegean Airlines to Athens so we were told to get to the airport at 7:30, to drop off the car. Exchanging the car took no time at all, but then we proceeded to wait in a 45 minute line to check bags. I won’t go into it too much, but the Santorini airport is a joke. It’s kind of like a cave in the middle of nowhere with no service, and where no one knows what’s going on. The flight to Athens was very delayed, which was fine.

Once we got to Athens we took another Aegean Airline flight to Israel. This flight was also very delayed and quite miserable. I think they told everyone to get ready for landing (tray tables up, chairs up, ear buds out, electronics off) twenty minutes into the two hour flight. Uggggh. We landed in Tel Aviv at three AM.