Happy Saint Paddy’s Day to you!

Tuesday morning we woke up to the sound of incessant car horns. We opened the curtains to a grey sky, but we were pleased we could see more of the neighborhood we were staying in (compared to last night’s visibility). For breakfast we went to McDonald’s where Daniel had an authentic Chinese Egg McMuffin (minus the ham and mayo).

We took the subway to the South Bund Soft Spinning Fabric Market to check out the market and the tailors. Thanks to Trip Advisor, we found Wu Quin, a lovely man who makes custom women’s clothes. We negotiated a price, went back and forth on a fitting schedule, and picked out fabrics together for something I wanted to get made. Then he measured me every which way, while we communicated—mostly though hand signals—about how things would work. In the meantime, Daniel had two custom shirts made at the stall next door. Satisfied with our sessions we decided to leave after being told to come back Thursday for a fitting.

We took a cab ride to the center of Shanghai to The Bund (a waterfront area). We walked down the promenade overlooking the Hugangpu River and saw the city’s spectacular modern architecture. We also saw over twelve couples taking weddings photos (not sure if Saint Patrick’s Day luck of the Irish means much to them here, but I honestly can’t fathom that a Monday in the middle of winter equates to a perfect day for photos, but then again, who knows…). 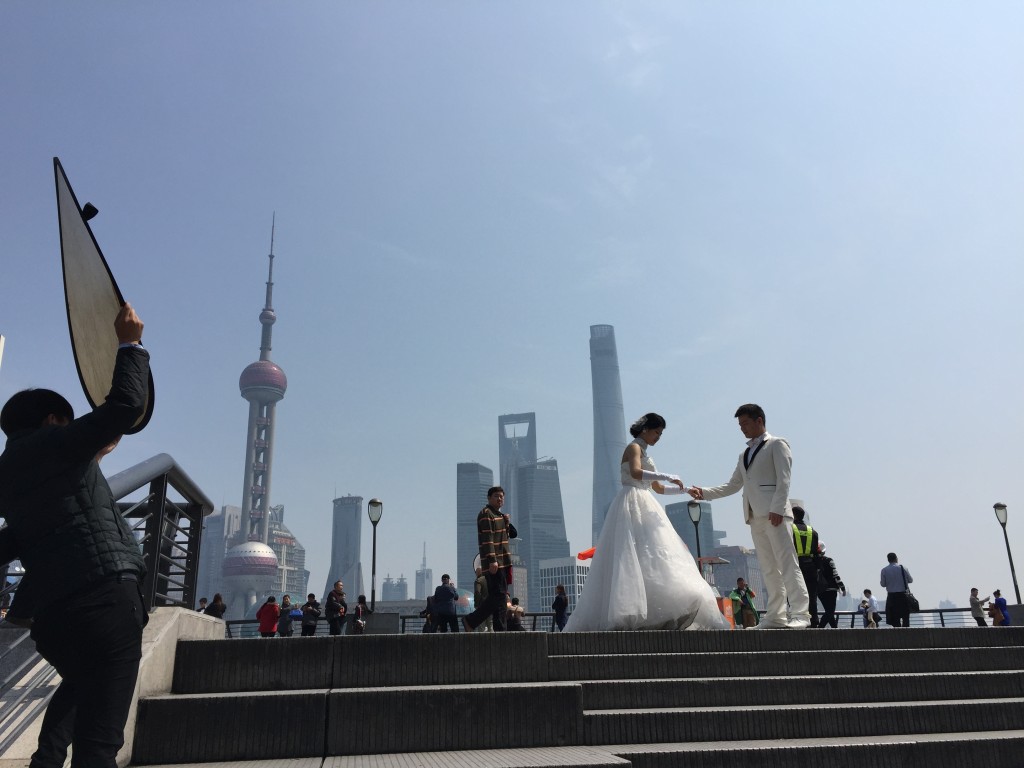 We took a quick tour of The Bund History Museum—I say quick because there really isn’t much to see. The architecture of the building itself was awesome, but the contents of the museum were nothing special. You can tell that they used translation app on the computer to write out the English descriptions of everything, because they made very little sense.

We decided to take a hop on hop off bus to check out the city, but decided to go for a quick authentic lunch at Subway. We got onto the hop on, hop off bus starting at the Peace Hotel. Once thing we noticed after just being on the bus for just a moment is that everyone honks their car horns …all the time! It doesn’t matter if there is a red light ahead, a person in the street, or a complete lack of traffic ahead—people simply love to hear their horns make noise. So we drove down the streets at a clip pace, listening to the bus tour amid the ongoing not-so-melodic car horns, and got off in the old city at Yu Garden. From the moment we stepped off the bus, a woman wearing light up, clip-on roller skates approached us trying to pedal her goods. We looked at what she was selling out of interest and then continued on walking, while she shouted 180 Yuen from behind us. She continued to discount her price (without us saying a word or turning around) until she dropped the price to 50 Yuen. At such a ridiculous price, we decided, why not, lets do this—so we bought them.

The old city streets were awesome and Yu Garden was absolutely magnificent. We saw rock structures (which they refer to as “rockery”), bonsais, 1800’s teak structures, and ponds full of more koi fish than we knew existed. After walking around for quite a bit we decided to hop back on the bus and head to the next destination.

We got off the bus near the Shanghai Museum, but had to figure out how to get across the street, since all of the sidewalks are above street level. We asked two elderly Chinese women (who spoke no English whatsoever) how to get across and they basically laughed at us until they gave us some kind of directions in a Chinese dialect. Realizing they couldn’t understand us, Daniel said “Thank you, you smell beautiful” and we walked towards the museum. At the museum we checked out a few Chinese historical exhibits including: (the Chinese seal exhibit, the ancient Chinese ceramics gallery, the Chinese minority Nationalities’ art gallery, the ancient Chinese jade gallery, and the Chinese Ming and Qing furniture gallery). When we left the museum we put on our roller sakes and went pretty much nowhere (the skates didn’t work that well—aka they didn’t work). We had a silly time attempting to skate around the front of the museum for a bit, all while gaining a few spectators. Eventually we gave up and decided to leave them for people who might know something we didn’t about them.

We walked around the city for a while until we found a milk tea stand. Stupidly, I ordered a large size only to discover that a large here is basically a bucket. So we walked around enjoying a bucket of milk tea until we happened to stumble into The French Concession (which is where we wanted to go anyway). The French Concession is amazing! It kind of reminded us of a more European version of the hipster parts of San Francisco. We walked up and down the streets checking out the shops and restaurants until we found Dr. Wine (a restaurant and wine bar). We ordered wine and food and headed back to the Sheraton.

At midnight we woke up because our room was boiling. We tried to turn on the air conditioning but had no luck. A hotel technician came up to the room to clarify for us that cold air does not in fact come out of the vent and told us a fan could be delivered to our room. Thirty minutes later and after two phone calls to reception there was still no fan. Daniel called down to speak to the night manager and the next thing we knew we were told to move to the room next door which happens to be a suit. Half-asleep we didn’t quite understand why we were moving, especially since all we wanted was a fan, which they brought to the second room anyway. #ThisIsChina.

All else aside, we had an amazing day here!