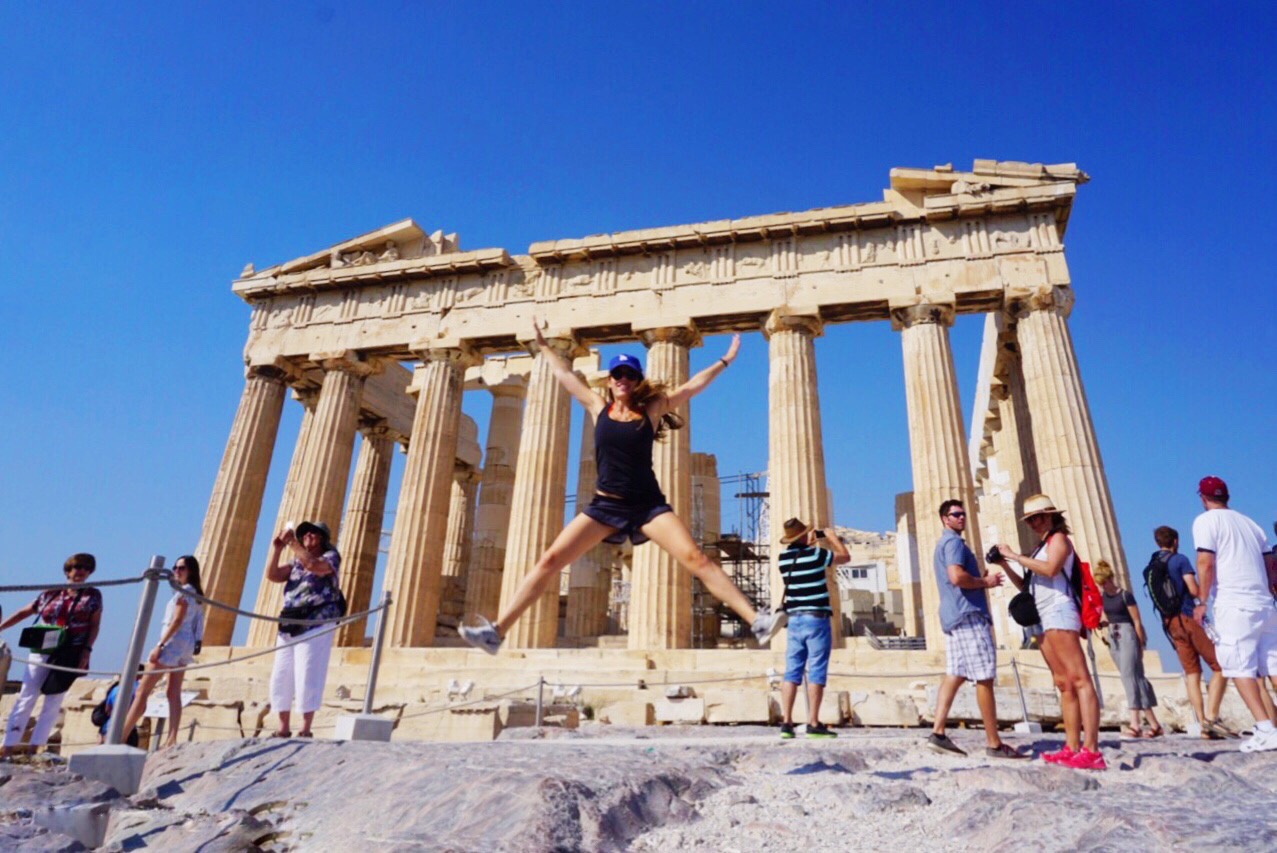 We just got back from our honeymoon trip to Greece, and we wanted to share ALL of the details with you! While I wrote down everything as it happened during the trip on my phone, a combination of bad internet access and not wanting Daniel to kill me resulted in this series of posts happening now.  We hope you enjoy!

Disclosure—I had pretty much nothing to do with planning this trip, so pretty much all credit goes to Daniel (and everyone who gave us recommendations)!

We left Los Angeles on Sunday, September 11th and flew Alitalia to Rome. As far as international planes go, this one was less than average—the seats more uncomfortable than Spirit Air, the flight attendants hated people, the vegetarian food had secret ham inside, and Daniel’s TV didn’t work. Daniel never mentioned how much he didn’t enjoy this flight either.

Using internet Wi-Fi, Daniel realized that Uber exists in Athens! Our driver, Giorgos—a ‘trendy,’ macho Greek man covered in interesting black tattoos, wearing a floral shirt and some type of pin-stripe pants—drove us to the St.  George Lycabettus Hotel all while twirling/playing with purple and white skull beads. The room was decent, nothing to write home about. But the view from our balcony was awesome. You could see the city with an excellent view of the Acropolis.

Our room was decent, nothing to write home about, except that the bed had plastic sheets. But the view from our balcony was awesome. You could see the city with an excellent view of the Acropolis.

Extremely exhausted, we headed out for dinner at a really charming restaurant called Oikeio.  It looked like it belonged in a hillside village in Tuscany. We sat on the sidewalk and watched a man and woman fight with the hostess for what seemed like half of our meal. We ordered a Greek salad, a Halloumi cheese and mint ravioli, a sesame fried feta cheese with honey, and tzatziki. The food looked better than it tasted but the atmosphere was awesome. After dinner we walked around the neighborhood of Kolonaki before returning to the hotel to pass out.

Tuesday morning we went to a cute coffee shop called Carpo and then to Caffé Da Capo to grab a light breakfast. Daniel was not pleased to discover that Athens is not an ‘egg and toast’ culture. They prefer a croissant or a pastry for breakfast. So after a little nosh we decided to explore the city.

On our way towards the Acropolis we walked past Parliament, and some ruins. We read that it might be smart to head to the New Acropolis Museum and learn a little bit before heading up to the Acropolis itself. The museum was pretty cool, and the layout was such that as you learned about aspects of the Parthenon, you could actually see it through different vantage points at the museum. After a quick refresher course about ancient Greece and Greek mythology we hiked up the Acropolis and saw the Parthenon. It was incredible, and insane that it only took 9 years to build.

Later we climbed down, and learned that the line to get up to the Acropolis resembled the line for the Matterhorn at Disneyland during the last week of summer vacation—I’m so glad we went early. Tip: We bought our tickets for the Acropolis early in the morning before we went to the museum, we’d recommend you do the same.

Anyway, Daniel had researched a cool restaurant in a non-touristy part of town, so we decided to walk there (at the time I was not aware of how far away it was). We stopped for a quick Greek frozen yogurt with honey along the way—way better than whatever we have in America, and at Central Market (basically a massive outdoor butchery) which was not my cup of tea….

Forty five minutes later we arrived in a desolate area, with a street full of cute restaurants. We went to one called Gazi College where they introduced some menu items with quotes like Grilled Cheese, “the famous American dish”. The ambiance and decor was awesome. The food was average at best.

After the meal we walked through Plaka before returning to the hotel. Turns out we had walked a total of 13 miles by the time we were back—thanks Daniel. Exhausted, we went to the pool to lay out. I couldn’t help but overhear the woman next to me have a few interesting conversations on her phone. The first conversation was presumably with her boyfriend, where she explained to him that it was her birthday and he would be taking her out for dinner in her party dress. The second one was with her mother where she explained to her that it was rude she hadn’t written a message like “You Are the Sun” on her Facebook wall for her birthday. (It looks like I was taking a video of the view, but turn up your audio).

We watched the sunset from our hotel roof top, which has to be one of the highest view points in the city. Then we walked to Cosmote, a local cell phone carrier location, and purchased SIM cards for the rest of our trip before heading to dinner at Malconi—a trendy and absolutely delicious Italian restaurant. Highly recommended. We went to bed early cause we had to wake up at 5:45 AM to go to the airport. Tip: If you’re looking to avoid serious international phone plan costs, we’d highly recommend buying a SIM and plan at Cosmote—very affordable.

Wednesday morning we woke up when it was still dark out. We got into an Uber and headed to the airport. We flew RyanAir this time. Fortunately for us, Daniel read the carryon policy ahead of time and learned that RyanAir has a smaller bag size allowed than any other airline. So we bought tickets to check in our extra bags for $20 each. Thank goodness we did this, because when we arrived at the airport, anyone who had a bag that was too large (aka everyone) had to pay an $80 bag check-in fee for their carryon. Tip: If you have a normal size rolling bag, you should look into buying extra bags ahead of time.

We went through security and waited quite some time for our bags to come through the other side of the scanner since the man in front of us had to have his switchblade and a shiv removed from his man purse before anyone could do anything (not joking).

We boarded the plane and I was sat next to a woman who made me look like I had no awareness of flight anxiety. She had white knuckles the entire flight from squeezing the arm rest, my arm, and my leg. She also seemed to be praying quite a bit. Very confidence instilling. After a quick 45 minute flight, we landed in Crete!