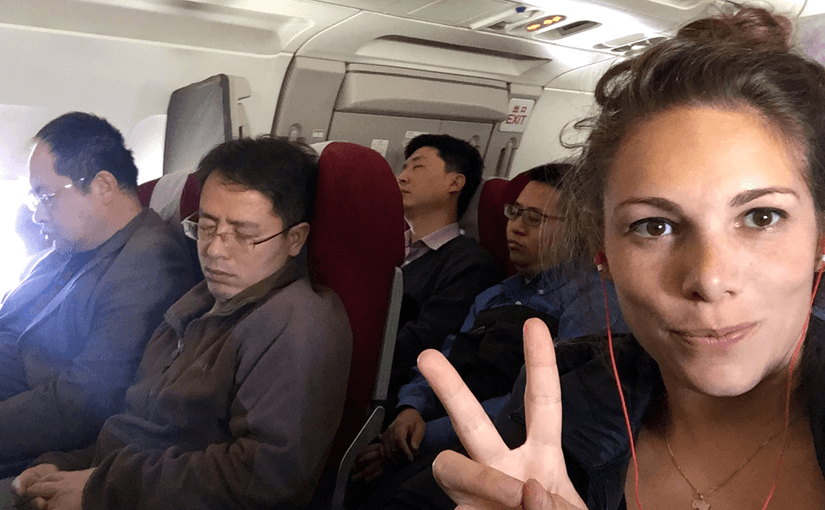 Friday was our last morning in Shanghai. We started off our day with a trip to McDonalds, so Daniel could get his egg McMuffin, and then took the train to the South Bund Soft Spinning Fabric Market to pick up our tailor-made goods. Daniel tried on his two shirts, which fit perfectly (thank goodness) and I tried on the jumpsuits Wu Quin made me. I love them—he did such a great job.

On our way out of the market Daniel decided he wanted to buy a “real Samsonite” suitcase from same man I bought one from the day before. To our delight, the man proceeded to do the same “jumping on the bag test” as he did the day before to prove how sturdy it was. [Don’t worry, we got a video of it this time and we highly encourage you to watch it now before reading the rest of the post.]

He’s so theatrical. Aren’t you glad you did that?

We got back to the Sheraton and were met with a level of unnecessary security (eight guards standing outside the building, a metal detector and x-ray machine at every entry point, and four security guards ‘wanding’ people) because of the world “water skating” aka figure skating competition occurring in Shanghai—this city is super serious with their security. We went up to the room, packed up and taxied to Shanghai Hongqiao International Airport (a 45 minute drive compared to a two hour subway to train ride).

It was about 11:00 AM when we arrived at the airport for a 1:30 PM flight to Beijing. But, as our travel luck in China goes, the lady at the Shanghai Airlines desk told us our tickets weren’t open and we couldn’t board or check into the flight. With no cell data or call time, paired broken wifi at the airport, we couldn’t call United Airlines. We went to the ticketing desk where they were unable to do anything so we missed our flight. Daniel managed to get the guys behind the ticketing desk to let him use their phone and called United in Asia (he waited on the phone for 45 minutes until he finally got an agent). In the meantime, I looked at the Hello Kitty food and got us Subway for lunch. By the time I walked back to the ticketing desk around 2:15 PM, Daniel was already checking in our bags. We were immediately escorted through two security points, the terminal, and up to the gate to make a 2:30 PM flight. It wasn’t until I was sitting on the plane that I realized we were flying China Eastern airlines.

Daniel and I were seated separately on the plane so I got really bored really quickly. I amused myself by taking selfies amid the sea of passed out and snoring Chinese men surrounding me until the flight attendant told me it was illegal to have my phone on during a flight in the Republic of China. For the remainder of the flight I watched the man across the isle compete with himself to see how far he could stick his index finger up his nose. When it was finally time to get off the plane I was body checked so hard—by a man resembling Jabba the Hutt—that I fell back into my seat. Manners are very different here.

When we entered the Beijing Capital International Airport we went straight to baggage claim—we were the only one’s waiting there (so strange). My bag came off of the conveyer belt fairly quickly but there was no sign of Daniel’s. We waited for a while until eventually a distressed airline employee led us over to the oversized luggage corner where we found Daniel’s bag completely unzipped with the lock still on. Clearly we had purchased a high quality bag (thank goodness, nothing fell out)—we managed to fix the zipper so it zipped properly.

After the bag fiasco, we found an information desk and asked a woman who spoke about 3.2% English if she could write down the name and address of our hotel for us in Chinese. We boarded the Airport Express train towards our hotel and took it to the first stop where a woman in a yellow jacket, with a Madonna microphone strapped to her head, crammed us into an elevator with 12 other people. When the doors opened, we found our way to the exit and decided to film a quick “Welcome to Beijing” video when a local taxi driver approached us. He said “taxxzi?!” in very broken English and Daniel confidently answered “I’m from South Africa” (apparently he thought the man asked if he was from Australia). Daniel showed him the paper with the address of our hotel in Chinese (from the woman at the information desk in the airport) and he looked confused. It turned out that all she had translated was the word “hotel”—so that got us nowhere.

We got directions, took two subways, rolled our bags for ten minutes down the street and finally arrived at the Renaissance Hotel. We had a delicious dinner upstairs, made friends with two guys who work for SAP (one from Valencia and one from Bosnia—but they both are based in Dublin), and headed down to the hotel pool (and jacuzzi!) for a swim.

After we got out of the pool Daniel called a local guide named Larry, who his cousin Lorin had recommended we use. Prepare for Larry because this man is my new obsession (more on him in the next post).