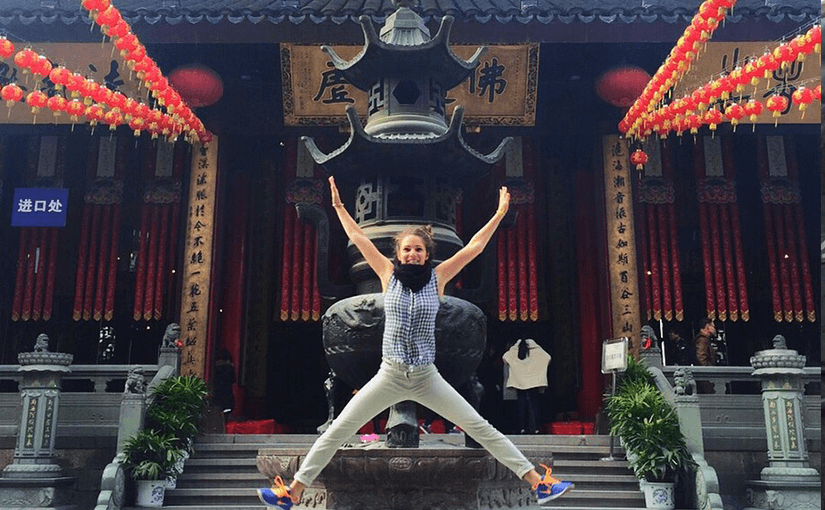 Thursday we spent the morning working on the blog because I’ve been having schpilkas about getting so far behind with these updates… With the last week of our trip almost fully recapped, I felt a lot better (but I think Daniel was annoyed because we missed the 10:30 AM McDonald’s egg McMuffin breakfast deadline—sorrrrryyy).

We grabbed some snacks from a convenience store to tide us over until lunch and took the train to the Jewish Refugees Museum—so crazy to think that this existed in China during World War II. The museum refers to Shanghai as a “Noah’s Ark” from 1933 to 1941, accepting around 30,000 Jewish refugees running from the Holocaust in Europe. We went through a few exhibition halls, read some individual survival stories, and saw the former site of the Ohel Moshe Synagogue—one of the only two synagogues in Shanghai built by Russian Jews. It was a great experience and it didn’t take a long time to see the whole museum.

When we finished up at the museum we took a taxi to find some lunch in the area of the Jade Buddha Temple. We attempted to eat at the vegetarian restaurant—which we found on a local website—but it turned out the the restaurant was located on the temple grounds for the Monks. So, we decided to wander around the area until we finally found Tsui Wah Restaurant, aka the only place with English on the menu. All you need to know about this restaurant is that you shouldn’t go. No bueno.

Post lunch we went to the Jade Buddha Temple and checked out the amazing and ornate statues of different deities and Buddha’s. We even snuck onto the back of an English tour to hear a bit about the history of the temple. The Jade Buddha itself was magnificent, definitely worth seeing!

On the way to the subway station I saw Coco, a milk tea place, and had to stop to get one. The people behind the counter spoke zero English so we decided to have some fun with them. When they handed the tea over the counter, Daniel proceeded to ask them—in some strange question arrangement—”This is Taylor Swift’s favorite drink for summer?” Obviously, their answer was “Yes Yes.” I love milk tea.

Eager to go to my first fitting at the South Bund Soft Spinning Fabric Market, we took the subway to meet up with Wu Quin. I was absolutely amazed to see how quickly he was able to produce such well made clothing! After discussing a few more alterations, I told him I would return Friday to pick up the finished products. At the same time, Daniel tried on his shirts and then gave his tailor some feedback—she didn’t seem to take his request for alterations too well (rather she defended all of her work wholeheartedly until another tailor in the market finally came over to agree with Daniel). Nonetheless, everything worked out for us.

On our way out of the market, we glanced over at a suitcase. The man selling the suitcase (“this real Samsonite suitcase”) then gave us the performance of a lifetime—chasing us around the market with a calculator, and jumping on the suitcase to show us how strong it was, all while screaming out “Hoooi! Heeeyah! Hooooi!”. Absolutely HILARIOUS! We bargained with him a great deal and ended up buying it. We inquired as to if he could get us one in a color other than “electric vomit” and he pulled out a black suitcase with some strange name on it. We asked him if this was the same suitcase as a Samsonite, and he proceeded to tell us it was a Samsonite—then he pulled out a silver Samsonite luggage logo, popped out the one that was currently sitting in the suitcase, and replaced it. I mean, it doesn’t get any better than this. Just way too funny.

Back at the unnecessary Sheraton business suite we were delighted to find that many of the socks we purchased from buyers at the Sock Expo had arrived. We went through the socks, made some calls, and did some work on Say it with a Sock (very exciting).

We went for dinner at 9:45 to a highly rated Italian restaurant on The Bund called Goodfellas (yes, like the movie). The owner of the restaurant, Marco, welcomed us with Prosecco and delicious bread. We ordered wine, delicious minestrone soup (this was the best one I’ve ever had), and pizza. The food was unreal and the service was fantastic!

After dinner we walked down the Bund, took photos with The Bund Bull sculpture (which Daniel grabbed by the horns—get it, he grabbed the bull by the horns), watched a few local women running along the promenade in high-heeled Nike’s and matching Juicy terrycloth outfits, and even found a man running backwards in jeans (interesting). What a faboosh day!