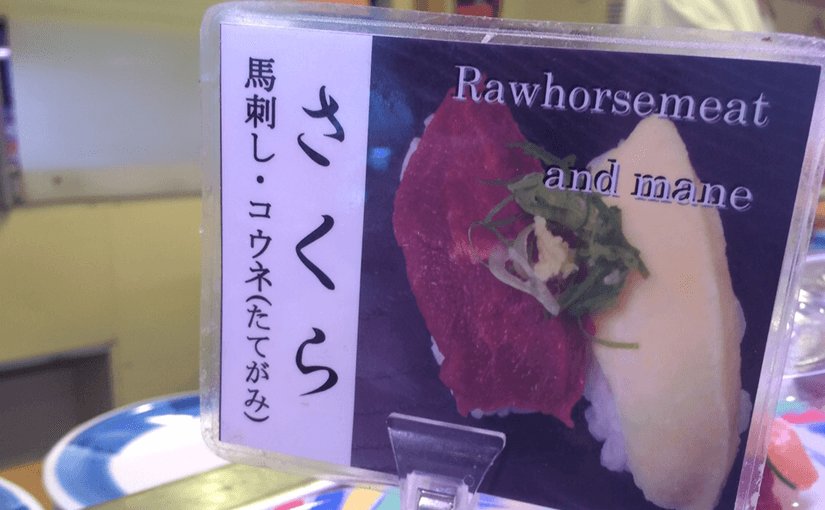 We arrived at the amazing Kyoto Station and took a taxi with the sweetest driver ever to the Kyoto Royal Hotel & Spa.

When we checked in I spoke with the receptionist for a good 20-minutes and planned out our transportation and itinerary for our three days in Kyoto with the help of Katie’s amazing guide. (THANKS KATIE!) Daniel tested out the toilets (and told me it was an immediate priority that I do the same) and decided that we live like peasants in America.

We walked across the street to Musashi Sushi, a conveyer belt style restaurant, for lunch. The place was delicious, but carried many things we’d never seen before like, raw horse meat, figure squid, boiled bones of fish, and black throat sea perch. We tried a “cream cheese sesame roll” that was basically a Jewish style bagel (minus the bagel).

After lunch we walked through a massive outdoor shopping mall Eirakucho and stopped for some hot milk tea, right as it started to rain. Each place we’ve been since Thailand has gotten progressively colder. We tried to buy gloves at a few stores, but since every store is preparing for spring they no longer carry winter clothes. One employee at Zara told us to try Uniqlo—when we asked her for directions she walked us out of the store and down the road until we were a few stores away (so kind and unnecessary, but we were so grateful and impressed by her kindness).

We took the subway to Kiyomizu-Gojo station and took a beautiful and very tranquil walk to Kiyomizu-dera Temple, one of the most famous landmarks in Kyoto. The walk up to the temple, called Teapot Lane, is lined with little shops selling snacks, and local handcrafted gifts and knickknacks. Another interesting thing to mention is that the temple was full of tourists that we have been referring to as “rent-a-geishas”—(exactly what it sounds like—tourists who rent geisha costumes and walk around the city in wooden sandals moving at a snails pace for the day). I have could never have done this for two reasons despite my love for dress up—1) There is no way I could ever feel comfortable moving so slowly 2) It was so cold outside (40 degrease Fahrenheit) there was no way I was going to suffer through the day in a silk dress and flip flips.

After the temple we went to explore Gion, Kyoto’s well-known entertainment and geisha district. While we saw more than our fair share of “rent-a-geishas” we didn’t see any authentic ones—to be expected as it is considered very rare to find them. After walking the streets for a while we headed over to a green tea ceremony at a place called En. A woman in a kimono, who I’ll refer to as a tea geisha (because I’m not sure what else to call her) explained traditional Japanese manners to us and then told us that a tea ceremony is about four things—1) Peace and Harmony 2) Respect 3) Purity 4) Tranquility. After a lengthy explanation of these things, a younger tea geisha walked into the room and performed the tea ceremony in dead silence (all you could hear was the sound of water boiling in the kettle and being poured). Every movement is so precise and thought out; every action has meaning. Once the tea-geisha was finished with her presentation, we were given a Japanese sweet and the necessary tools to make our own green tea from Matcha powder—this was great! After the ceremony Daniel asked the tea-geisha “Do people actually speak to each other at Japanese tea parties?” and her answer was “Only a little bit—the main guest asks the host about the history of the tea utensils, but that’s all the conversation made”—for the record this is definitely not my kind of tea party.

When we got out of the tea ceremony, the weather had dropped into the high thirties. We made friends with a fabulous woman named Deisha from Portland, but then split up because we were turning blue. We returned to our hotel, put on more clothes, and went to a very cool Japanese restaurant called Kappa Sushi. The sushi was insane—best salmon nigiri we’ve ever tried. Towards the end of our meal a good-looking older Japanese woman carrying a white pony fur purse with a taxidermy frog (serious jewels inset for eyes) and wearing a dental hygienist mask sat down next to us—she reminded me of the sassy socialite woman from the movie Harriet the Spy. Anyway, we started talking to her (her name is Sudako) and learned that she lived in the Oakland Hills for twenty years but now lives in Osaka—small world. We asked her why people wear the hygienist mask and she explained that she wears it for allergies because it’s spring time (even though it feels like the dead of winter), but some women think it’s very fashionable to just show their eyes—so they pinch the top of the mask and make it look higher up on their nose to appear more western—so strange. Before we left, she gave us some sage life advice aka she told us about the importance of buying quality products—“I bought a $700 lice-cooker and it’s never failed me”. Fun fact: just like Daniel’s niece, Sudako’s granddaughter is also named “Orivia.” I’m so thankful we had the opportunity to meet her. She was a real gem (just like the eyes on the frog on her purse).

Shivering cold, we walked down the narrow streets in search of a drink (it was now 35 degrease out). A man approached us and asked what we were looking for, we told him a good bar and he pointed us down the narrowest passage of micro restaurants and bars to a place called Concrete Bar. Confused as to exactly where he was pointing, he then walked us towards a brown door (shorter than I am) covered in stickers and slid it open to reveal a two-story closet sized bar—so cool! We sat down and ordered whiskies and were soon joined by two men from Sweden named Mats and Robert. We spent the rest of the night drinking and chatting about all the fun things in life (e.g. travel, great food and drinks, Netflix and HBO television shows).

Kyoto coming in for the win!