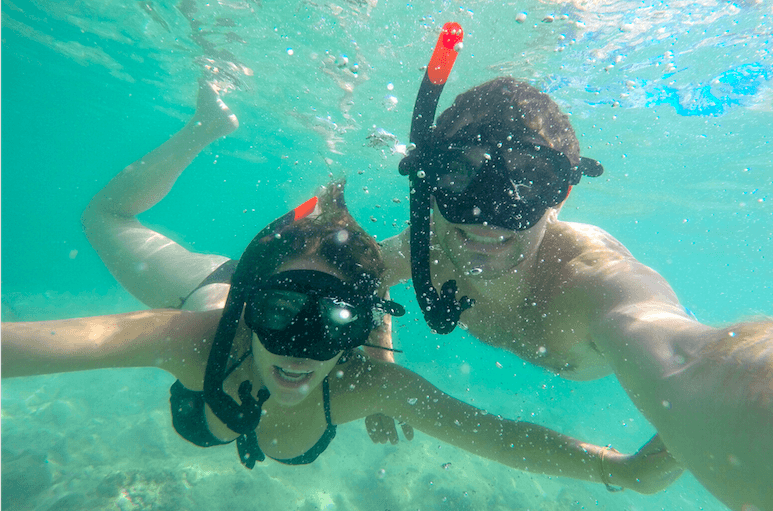 We caught some type of bug “from the local fauna” and have been down for the count. I didn’t feel like updating you on the mundane and semi excruciating details of our illness so I’ve just left you in the dark for a bit. Apologies.

Thursday morning we woke up feeling pretty terrible. We didn’t get out of bed until Friday morning when we had to pack up, check out, and board a ferry to Ko Phi Phi. Let me tell you, when you’re not feeling well a two hour ferry ride in Thailand is your worst nightmare.

Anyway we arrived in Phi Phi, an absolute jewel of an island, and schlepped our backpacks (which I can definitely say I am not designed to do) down several narrow, unpaved roads (which housed much better shops than any other island) to our accommodation, the PP Casita. The PP Casita was definitely a downgrade from the Bhu Nha Thani, but not nearly as terrible as the Pardon A Decrepit Accommodation. We were shown to a corner room on the bottom floor, which was engineered so that you couldn’t possibly access natural light unless you wanted the entire village (from one side) and/or the rest of the bungalows at the Casita (from the other side) to watch your every move—which, for the record I don’t think anyone would have enjoyed much considering how horrible we were feeling. Daniel suggested that lunch might be a good idea, so we walked to a local place called Anita’s. Barely able to stomach the food, we went back to our room to recover until dinner. Feeling a bit better we went to dinner at place recommended by Trip Advisor called Anna’s Restaurant (the sign was written in Disney’s Aladdin font—definitely legal), which was amazing. I was delighted to finally find a delicious and truly vegetarian, vegetable noodle soup!

After we ate we decided to walk down to the beach parties that half of the island was advertising for. Side note: Phi Phi smells like poo poo and fish guts (gross but true). All down the beach there must have been 5 almost identical bars with plastic chairs set up around them. All of them had different types of poi/fire throwing shows going on. We ended up going to one called 4Play where we noticed a man standing on top of a tall poll about to walk a tight rope (aka a discarded piece of rope from a long boat anchor—very safe) while juggling fire. The guys doing the show were absolutely amazing, except for when they would accidentally drop the fire directly onto an unsuspecting audience member’s head, foot, or crotch (which happened twice). Oops.

There was one audience member, an extremely drunk bald man wearing just a bathing suit, who decided he needed to be involved throughout the show. He kept running up whenever the guys were throwing fire and would try to stand next to them, or sit under them. His girlfriend, who seemed absolutely horrified, kept running up to grab him and pull him back while he would vehemently resist—this happened so many times it became a show in itself. Unphased, the poi guys started a fire limbo and invited everyone to participate. Obviously, the drunk bald guy was the first one to join and the second, and the third, and the forth, etc, because he kept going back and forth until they pushed him aside. I thought this was hilarious, until he started flashing himself and trying to lick the fire. Amid the drunk man’s insanity, Daniel managed to sneak in a low limbo before we decided to call it a night.

Saturday morning we woke up feeling much better. We ate a semi-edible breakfast at the hotel next to an older woman with about thirteen fake lily flowers haphazardly placed throughout her bun (if you could call it that) and headed to the beach. The beach was absolutely magnificent, exactly what you see on a postcard—white sand that fades into clear water that goes from turquoise, to green, to light blue. (They call Phi Phi “Thailand’s Superstar” because of the islands beauty as well as its appearance in films like Danny Boyle’s The Beach.) At the beach we rented beach chairs (cause everything on these islands is for a price—even if it is cheap) and spent the morning reading and relaxing. We ate lunch at a pretty cool place called Grand PP Arcade and went back to the beach to chill a bit more.

In the afternoon we rented kayaks and snorkels from a woman—who laughed at Daniel’s every attempt to bargain with her—for 300 Baht ($9), and paddled out to another side of the island called Monkey Beach. The beach was absolutely littered with garbage and trash that the monkeys were trying to eat, which was pretty sad. Daniel hooked his GoPro to a wooden swing to see how the monkeys would respond, which was lots of fun until he realized we may not get it back (little thieves). So we grabbed the GoPro, put on our snorkels and went looking for fishes. The water was so hot it must have been 90 degrees +. I’ve never been in an ocean, or even a pool for that matter, this warm in my life. The snorkeling was decent, nothing too exciting down there, but lots of fun. We paddled back to the main beach, returned the kayak, and went swimming for a bit. Eventually we headed back to the Casita to get ready for dinner.

We went back to Anna’s again for another amazing meal of vegetarian noodle soup and something called chili cream, which Daniel fell in love with. Then we walked all around the island to see everything we had previously missed. Daniel found an ice cream shop, kind of like Coldstone, except that that actually freeze the ice cream with the mix-ins on a cooling table in front of you. The finished product looks like little ice cream rolls. Super cool and pretty tasty. Towards the end of the night we walked back to or room and packed our bags for an early morning departure.