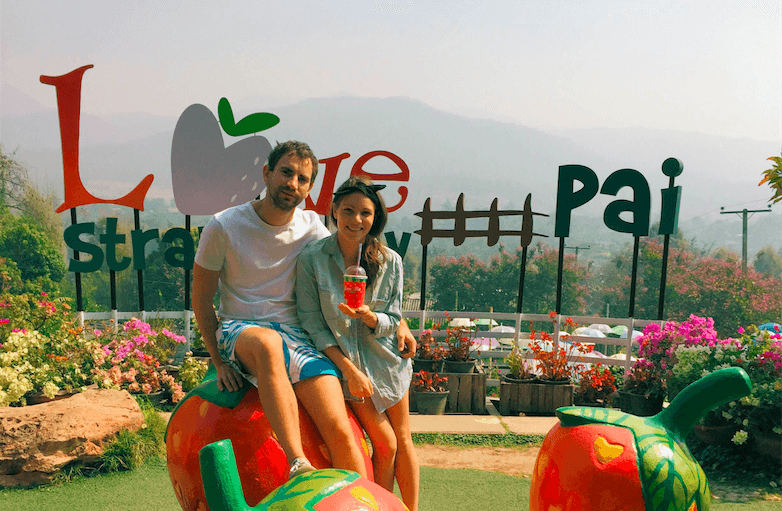 We’ve slowed down our pace a bit. Nothing to report as wild or crazy as the last two email recaps, but this one is still lengthy. A few of you have mentioned that you enjoy reading this while in the bathroom, so we hope you enjoy. Oh, and speaking of bathrooms, it’s worth mentioning that most public bathrooms here do not have toilet paper—just a hose (not so cute). So now I carry a role wherever we go.

Driving to Pai from Chiang Mai took 3 hours and required 762 turns up a hillside mountain (no we didn’t count, it’s a wiki fact). Heading advice from every person who’d done the drive, I took Dramamine preventatively—I never got car sick but it made me feel jet lagged all over again. Anywho, the drive was easy and quite scenic. Throughout the majority of the drive we saw over 100 little coffee shops all promoting “the best coffee”.

We made it to Pai around 1:30 PM and checked into Rim Pai Cottage—an accommodation highly recommended by Lonely Plant. The place was very nice, a basic, modern-day hut perched on support beams with a wooden staircase and a bathroom, but nothing to write home about. The shower pressure was non existent…. I’ve met many leaky faucets that have dispersed more water than that shower.

Ready to eat, we consulted Trip Advisor for a lunch spot. The number one ranked place to eat in Pai is Cafecito, a little Mexican/coffee spot on the sleepy side of Pai—Mexican food in Thailand, who knew? The decor was awesome. We sat down inside and ordered: blackened fish tacos, breakfast burrito, beer, and eventually cold brews.

We started chatting with the girl at the table next to us, only to learn that she was named Lauren (obviously, cause who isn’t these days) and living on a boat in Marina Del Rey. Coincidently she happened to be college room mates one year with our friend Diane in SF… small world. She also just quit her job and was traveling for 9 months. Daniel helped her plan her trip to South Africa while I took a mini siesta. Eventually we walked back to the hotel and I passed out for 2 hours thanks to Dramamine.

I woke up around six to Daniel making gin and tonics—I mean, I couldn’t ask for a better live-in if I tried. We had a drink, put on warmer clothes (because as we leaned, Pai is not a summer or spring weather town at night/early morning), and headed out to the town. The streets were lined with local venders selling the typical Thai street stuff (elephant pants, flowers carved out of soap, shorts made out of bathing suit material, postcards, notebooks, carved wooden things, colorful pom pom hair ties, flowers, etc) as well as a variety of street food. As far as eating goes, street food is great, but a lot of the time there is nowhere to eat it, so we opted for authentic Thai Italian food at a place called Baan Pizza. The pizza was good but nothing either of us would remember.

After dinner we wandered, following the sound of live music only to realize there was a river between where we were and wherever the music was. We found 3 girls sitting on the balcony (singing poorly at the top of their lungs) among a nearby grouping of huts, and asked them how to get to the music. They told us to join them. On our walk to Circus School (live music) we learned that they were from Holland, traveling for 1.5 months, and had spent the day pushing the scooters they rented across town because their gas meters said they were almost out of gas (later when they arrived at the gas station and opened their tanks they discovered each one was still half full). Oh Thailand tourist traps.

Circus School was basically a small field with huts. We got drinks at one hut and headed over to the music hut to hear a British hippie man play guitar. He sounded like a mixture of Justin Bieber and Dispatch. After a couple of songs we decided to head back for the night and pass out.

We woke up the next morning and went to eat breakfast (many accommodations here give you a voucher for breakfast when you check in)…nothing to report. Then we got in the car to drive out of Pai. About 5 minutes out of the main city there is a strip of amazingly kitchy coffee shops. Of course, we had to stop at 3 of them for some photo opps. The first one was called Coffee in Love, the place had great views and a floral rose wreath shaped like a heart. The second one was called The Container and was colorful, crazy, wonderful, fun overload with swinging egg chairs and technicolored views out onto the mountains. I decided that Barney’s alter ego, who would be called Yenrab, would live here and trip out all day. The third own was called Love Strawberry Pai and was basically a strawberry themed, theme park that served coffee, strawberry fruit shakes, and of course, strawberry themed clothing, hats and bags/pouches. All three places were absolutely historical.

Almost through our 762 turns on the way down, we stopped on the side of the road at a placed called Pankled Coffee for lunch. We got pad Thai and enjoyed the view of the sheep they randomly kept in an enclosure a distance away from the restaurant. After lunch we drove the car back to the airport and sat down at Burger King, the only place with electrical outlets. Daniel edited videos while I took a nap in the booth (so classy).

We took a 2 hour flight on Air Asia from Chiang Mai to Krabi. I know I described Bangkok as organized chaos, but the Krabi airport was just chaos. We had to buy our taxi to our accommodation inside first and then wait on the road for a random woman (who may or may not have actually worked at the airport) to tell us to enter a car based on some system I’m sure she made up in her head. We got in the taxi and drove to our hotel Tairada aka the Royal Ripoff (I don’t only mean it in the sense of the room price, but more so in the sense that every service they help you book is double the normal amount—e.g. a taxi into town, a ferry boat service, etc). The woman at the counter speaks less than three words of English, if that makes any sense, which I’m sure it doesn’t because most things don’t. After some communication difficulties we took an overpriced taxi to the main strip in town. We booked our island ferries for cheaper and met a friendly Malaysian guy named Ean. Ean worked for Air Asia and told us some excellent stories. We invited him to go to the outdoor market with us for dinner. Shortly after sitting down to eat it started to rain, so we got onto another mode of transportation and went back to the Royal Ripoff to go to sleep.

We woke up this morning and went downstairs to wait for our ride to the ferry to pick us up at 9:20. After multiple calls back and forth with a woman who continued to tell us our transportation would arrive “anyyyy minute,” we decided at 11:20 to just take a taxi.

We arrived at the port just in the nick of time to catch our ferry to Ko Lanta (an island off of Krabi). We got to the front of the boat thinking we got the best seats in the house, but it turns out we have been on a 2 hour ride in the splash zone. As were starting to dry off I can see a thick layer of dried salt appearing. Super cute.

Enough for now. Enjoy the novel.