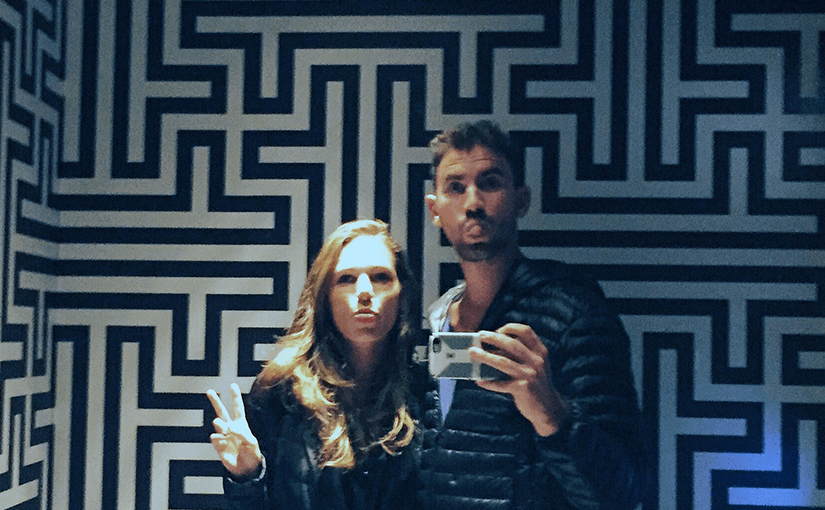 We arrived in the Hong Kong International Airport Thursday night around 8:30 PM and were quite relieved to learn that China’s firewall didn’t extend there (aka we could use the internet freely). We took their subway system, the MTN, from the airport to Hong Kong island, and then a taxi from the MTN station to our hotel. The MTN is unbelievable (it incredibly quick, clean, cheap and gets good service. The taxi ride to the hotel was awesome, we got our first glimpse of the city in all it’s night light glory—buildings piled sky high, each one bigger and more modern than the next—quite a contrast from the simplicity of Thailand.

Around 10 we finally arrived at the Ovolo Southside, a brand new hotel in Hong Kong’s up and coming arts district. When we walked inside we were absolutely stunned by just how beautiful the place was. From the views, to the service, to the art (and there was a lot of really amazing stuff) we couldn’t have been more excited. We met the hotel’s manager, Cliff, who gave us tickets to Hong Kong’s Art Central (a local exhibition for up and coming artists that they were sponsoring), and a bunch of recommendations for what to do around the city.

Exhausted and starving, we were shown to our room—a small, but modern/industrial space filled with simple and elegant furniture on the sixteenth floor—and directed to CIRQLE (the hotel’s restaurant) for dinner. The food was outrageously delicious (pasta with truffles, a Moroccan baked eggplant dish with hummus and rice, and truffle fries) and the ambiance was awesome. After dinner we went up to the hotel bar, ABOVE, for a quick drink and to check out the city’s notorious skyline (I got a Prosecco and Daniel got some spicy tequila drink that they pour from a tea pot into a glass with a mint leaf). The temperature in Hong Kong was in the ehigh forties/low fifties (Fahrenheit) that night and both of us were absolutely freezing, especially after being in hot and humid weather for the past month. We decided to hit the hay around 1:30 AM, after coming to the conclusion that we were obsessed with Hong Kong and could see ourselves living here (even though we hadn’t yet left the hotel).

Friday morning we woke up and went down to CIRQLE for breakfast (a delicious spread) and then took a double decker bus to Kowloon. We started off on Nathan Street looking for Sam’s Tailor, but were informed that we didn’t have enough time in Hong Kong for fittings—womp womp. Afterwards, we went to Victoria Harbor City mall (which we thought was called Victoria Habba due to local accents) to get Daniel a pair of nice pants and grab lunch. We ate take-out sushi in the food court and it was absolutely delicious (but next to impossible to get a table).

Ready for a day of exploring shops (or shopping) we headed to Granville Road to check out the local attire. We later learned that aside from the malls, most shops here don’t open until around 3:00 PM—not quite sure why this is, but we thought it was pretty strange. We meandered down the street and found that most of the tiny shops you see street-side actually extend several stories up into massive buildings—very unique to Honk Kong. When more shops started to open, I stumbled upon a random entrance to a nine-story “shopping mall” filled with about thirty 8×8 foot stalls per floor. It felt like we entered some secret realm that kept unfolding. I found a few things to buy and then we left.

Later on, Daniel went to get a haircut (he’s never looked better) while I went to some huge mall where they refer to everything as “THE _____” (e.g. The Fashion, The Food, The Beauty, etc.) Eventually we took the bus back to our hotel, showered, changed, and went to an Italian restaurant called Sepa. The place was beautiful, the food was incredible, and the service was horrible (I think we waited over an hour and a half for our first dish to come). Nevertheless, that didn’t seem to matter as we made friends with a local couple at the bar (Dheeraj and Rada) and spent three hours drinking and eating together. We really enjoyed their company! After dinner Daniel and I walked down to Long Kwai Fong (LKF) to check out the nightlife scene and eventually went back to the Ovolo to pass out.