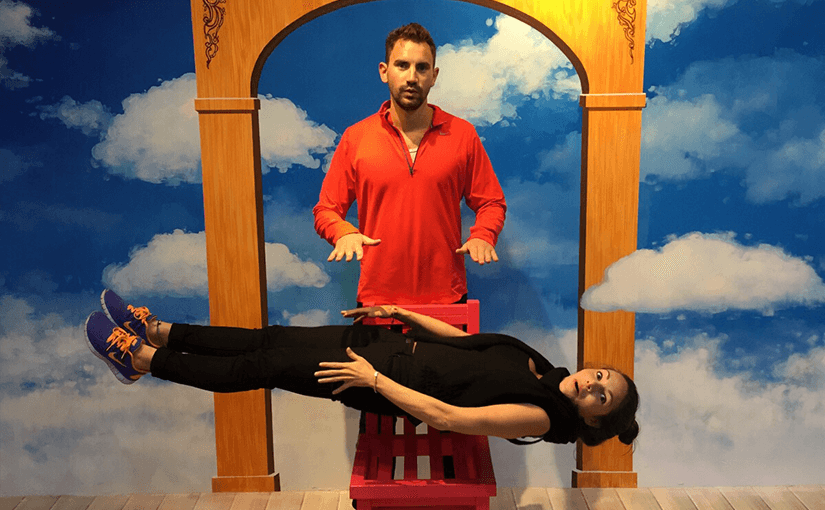 Sunday morning we woke up early and took a taxi to the top of the Hong Kong Peak (Daniel’s father gave us this advice to avoid waiting in a two hour tram line). Unfortunately, when we arrived, the fog was so thick that we couldn’t see a thing. We figured that maybe if we waited an hour visibility might get better, so we headed into the shopping mall and found a local attraction known as the Trick Eye Museum. The “museum” was basically a few interconnecting large rooms filled with different paintings, illusions and props on the walls and floors where you can pose and take awesome photos. Now I know that the expression goes, “the early bird gets the worm,” however, we were there so early, there was no one else to help us take photos of ourselves. So we posed solo for many of these scenarios until we found someone to snap a few photos. I should probably be embarrassed to admit this, but I absolutely I LOVED this place.

When we left the museum the fog was still there and the visibility was still pretty much non-existent—but we figured we’re here, let’s take the tram down to Central. We bought tickets and hopped onboard with zero wait time. The tram went down the peak at a 45-degree angle. It was pretty cool, but it seems like a more serious version of being a tourist and riding a San Francisco cable car.

When we got to the bottom we walked to another famous attraction called PMQ (Police Marital Quarters). PMQ is where Hong Kong used to house police families, but now it is more like a artsy/cultural center. There are plenty of cool café’s, dining spots, shops and local artisans selling goods. Even though it was a Sunday, it wasn’t yet 3:00 PM, so many of the shops weren’t open. We decided to grab lunch at a place called Wilbur’s Burgers—Daniel got a Happy Hippie Vegetarian Burger and I got a poor excuse for a vegetarian burrito before leaving. Daniel always seems to have better ordering luck here.

We walked down Hollywood Road for some window-shopping and navigated some side streets to check the trendy gadget shops. We went to Elephant Grounds, one of Hong Kong’s most highly rated coffee shops, and then walked over to Art Central to check out the local exhibition. The place was super cool, but couldn’t have been more crowded. We spent an hour looking around, had a glass of wine, and left. We walked through Hong Kong Park (it kind of reminded us of Dolores Park in San Francisco) which was full of people picnicking, kids playing, and even a random performance, to get to the MTN station, which we took to get to the Ladies Market in Kowloon.

The Ladies Market, and its surrounding streets and shops, is not for the faint of heart—this area is hustling and bustling. The first thing we noticed when we got off of the MTN was that there were seven Nike stores (all selling “real” Nike shoes and apparel, of course) within a block and a half of each other . Then we went to Mong Kok Computer Center aka heaven for nerds aka heaven for Daniel. I’ve never seen him so truly happy to be in any type of shopping environment before. He lit up as we walked through the four-story electronic mall—each shop selling different varieties of the same of phone cables, computer parts, GoPro accessories, security cameras, selfie sticks, covers, cases dangles, dongles, etc. We bought a few things there and then headed out to take on the Ladies Market night bazar.

The Ladies Market was filled with all of the usual night bazar things you’d expect to see—mainly fake bags, wallets, glasses, jewelry, watches, wigs, kitchen appliances, man-thongs, woman-thongs, bras, traditional Chinese attire, etc. Sometimes the people who run the different booths—under their breath—will approach you and say things like: “I can find you Rolex watch”, “I sell you real designer handbags,” “I sell real nice wallet just for you, good price”—so funny. We found few things for ourselves, but mainly gifts for other people. At one point a man who I’ll refer to as Peanut (because of the large gold peanut charm he wore on his necklace) chased us down the road until he had my attention. When I looked at him, he smiled like he knew me—but when he realized I was confused he asked me if I remembered him. Obviously, I said “Sorry, I don’t know you” at which point he proceeded to pull out his phone and go to his photos, while telling me he saw me at his shop. For a moment I figured he might have had a really good memory, because it is entirely possible that I did see him in a stall somewhere. He then showed me a photo on his phone of him and a girl wearing a similar blue shirt with brown hair in a bun… definitely not me. Then he seemed a bit embarrassed, apologized, and told me it was confusing for him because lots of American’s look the same. Such a funny stereotype reversed.

Exhausted from being on our feet for twelve hours, we took a cab to Elements Mall for dinner, found a Japanese restaurant called Sen-Ryo, which turned out to be the most delicious authentic conveyer-belt sushi ever! I’m not exaggerating when I say that it put most sushi we’ve had to shame. We felt like we couldn’t have had a better end to the night… but then we decided to go to Ozone Bar, the one at the top of the Ritz Carlton. Ozone bar is the tallest bar in the world, sitting on the 118th floor of the hotel. We went up, checked the view, took a photo, saw the drink prices, and turned back around to leave. What a busy day!