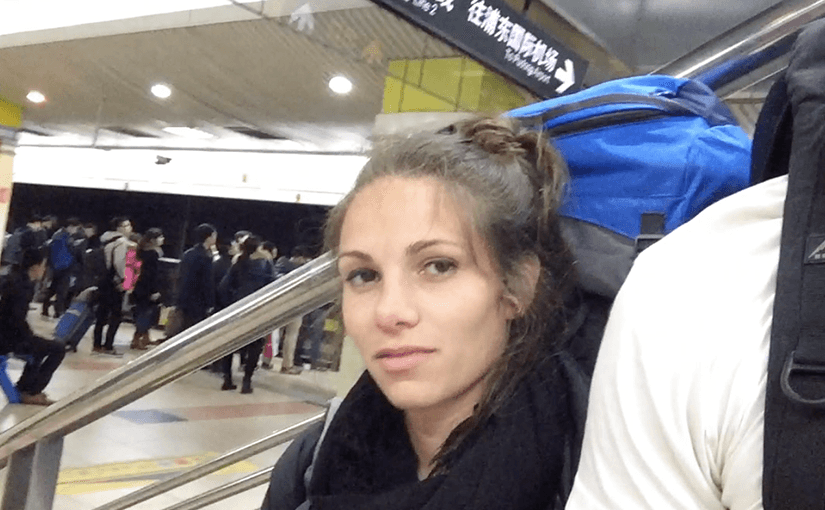 We’re definitely not in Kansas anymore, because we are most certainly in Mainland China. Shanghai is freezing (low forties Fahrenheit), and it’s kind of creepy because you can’t see anything due to the intense grey fog.

The moment we stepped off of the plane we got onto a bus to take us to the terminal. For reasons unknown, the driver seemed to be doing donuts on the tarmac before eventually dropping us off. The Shanghai Pudong Airport pales in comparison to the one in Hong Kong. After going through customs, we tried to acquire SIM cards, but felt strange when a man with a printed sign of a telephone company told us he could give us one for a random price that he entered into a calculator. He didn’t speak great English, and there was no plan booklet to look at, so we decided to skip out on his offer. We went to an ATM to withdraw money (they use Yuan, no more Hong Kong dollars) only to find the ATM was out of money. We missioned around the airport until we eventually found another ATM on the third floor.

We had the option of a taxi or a train, and we decided to take the train, which connected us to a second train, and then eventually to a third train. We bought our first train tickets, put our bags through security (even though the station was in the airport) and boarded a 6-minute train to another station. At the second station, we bought another ticket, put our bags through security again and arrived at the third station—it was around here that I started to get over schlepping my backpack and going in circles with directions.

At this point, we had one massive issue—we had no cell phone data and the screen shots we had taken of our transit plans from Google Maps, didn’t extend this far. Thus, we couldn’t take a third train because we didn’t know which stop to get off at. All we had was a print out Daniel made, which included the name and address of the Sheraton Four Points hotel (in both English and a Chinese dialect). We decided to forget the third train and just find a cab. But, for some reason all seven cabs in the taxi line refused to take us even after looking at the paper (and unfolding it which only reveled information about our dietary restrictions). Extremely confused we found a guy at a food stand down the street and asked if he could help direct us., surprisingly, he spoke some English. While he was trying to help us a guy passing by stopped to ask where we were trying to go. As he and the food stand owner were working it out, a third guy stopped and took out his phone to help us look up where we were going. The short version of the story is we eventually got in a cab that took us to the hotel, but both of us were so touched that people took time to help us. Truly, it was a kind of culture shock I hadn’t expected.

The Sheraton Four Points is a very old-school corporate hotel. I’m sure in it’s time it was quite fancy, but now it just seems a little tired and full of smoke (everyone secretly smokes in the bathrooms off of the lobby). Starving, we went up to the hotel restaurant called Panache for dinner. All I can say is the meal represented whatever the stark opposite of the word Panache is. I got a very cold soup , which they took back to the microwave to warm up, with french fries and Daniel got a very interesting interpretation of a penne arrabbiata, which he ended up wearing all over his shirt. I think we’ll have to find some vegetarian Chinese food, cause Western clearly isn’t working. After dinner, we walked across the street to the local convenience store, got some milk tea and decided to call it a night.